Save
Casa U / MATERIA 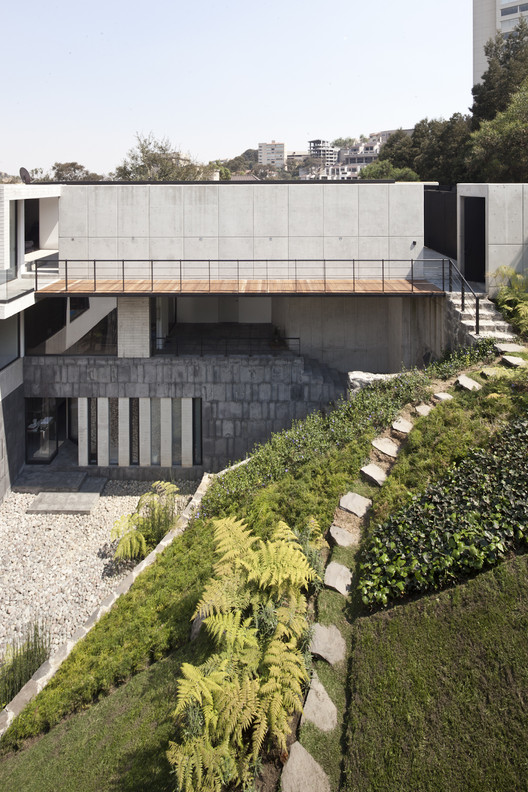 Text description provided by the architects. Casa U is located in the suburbs of Mexico City in a very steep and hilly site overlooking the Valley of Mexico. The pronounced slope generated a sitting that emphasizes the intimate relationship between the spaces of the house with the site´s topography.

The parti questioned the typical sequence of a house, having its access in its roof to then descend into the private and social spaces of the house. A large number of trees served for tracing, framing the house and giving it more privacy.

The exterior facade is sober and simple, hiding the house beyond and making evident the relationship between slope and horizon. After an entry portal, a bridge extends the transition from the street and becomes an observatory. By stepping away from the slope, the house reduces its footing and frees up the most of green surface.

The stair becomes the core of the project, acting as the material axis and a threshold of light. It distributes to all levels and spaces making use of landings with framed views, bringing the landscape into the interior at different scales. The steps are strategically longer in some sections to slow down the person and allow for amore conscious act of transitioning between levels.

The top level holds the garage and access vestibule, being the next level down occupied by two bedrooms, two bathrooms, a master bedroom with private bathroom, a terrace and a studio, followed by the living room, dining and kitchen floor, and lastly a semi-buried level with a playroom and access to the lower garden.

The materiality responds to the function of the spaces. The highest volumes containing the bedrooms reach the clarity of the sky. The social level, the one with access to the gardens is expressed with a heavier nature using black stone rhythmically divided by small ridges that provide a continuous play of light and shadow mimicking the volcanic local stone. This two make the volume look embedded into the soil. Finally, an in between concrete is used for all of the volumes that contain service spaces. 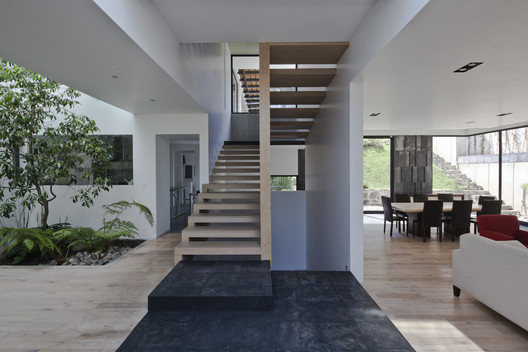