Bing Thom Architects have released new images for Hong Kong’s Xiqu Centre, designed in collaboration with Ronald Lu & Partners. Currently under construction, the building is scheduled for completion in 2017, becoming the first venue to open within the new West Kowloon Cultural District. The Xiqu Centre will serve as the home of the Chinese Opera, as well as play host to an array of cultural events.

Conceived as a cultural sanctuary containing spaces for theatre, art and contemplation, the project draws inspiration from “the soft glow of a lantern behind a beaded curtain,” lighting up the street through four main openings and a series of lightboxes on the building’s elevation. The center’s form reinterprets the traditional Chinese motif of the Moongate to become the gateway into the cultural district – master planned by Foster + Partners – and expresses the concept of “qi” or flow through its curvilinear paths and elements.

To enable the ground floor to become an open plaza space, Xiqu Centre’s main theater has been lifted several levels into the air, a move that also isolates the theater from the vibrations and ambient noise from the metro station below the site, creating a quiet space suitable for an opera house. The acoustics within the theater itself have been carefully designed to support the human voice by finely tuning reverberation time and targeting audience seating areas. Transformable acoustical devices including curtains and banners have also been added to ensure high clarity of sound for various types of performances.

The theatre’s lobby space is flanked by two outdoor sky gardens, and will feature panoramic views of nearby Victoria Harbor and Hong Kong’s iconic skyline beyond. Additional spaces within the structure include rehearsal rooms, classrooms, administrative offices, a teahouse theater and retail areas around the building’s central courtyard. 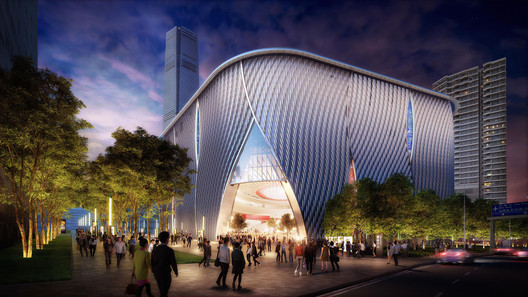