The new cultural center is situated at the periphery of the Old City, among the traces of the old Suncheon Wall. Drawing upon the concept of the wall, the building rises up in one continuous sweeping motion, enclosing a garden and event space at its center. The circular volume rises at certain points to allow permeability between the center and its surroundings, presenting four "gates" for users to pass through.

The center is programmed to host an array of cultural, educational and community events, both within the building envelope and the transformative garden. The building is comprised of a series of composite spaces, which have the flexibility to host everything from professional facilities to gallery spaces, social spaces and meeting points. The center will promote research, preservation and education, providing a place for visitors to actively engage and learn or alternatively, simply sit and disconnect.

Dialogue between the building and the natural environment is encouraged through floor to ceiling glazing on both the external and internal facades. The green space enclosed within becomes an oasis, linking the space to the mountains and wetlands. The landscape is raised to provide a buffer to the urban condition which borders it, with the infill creating an internally facing amphitheater.

The design took sustainability into high consideration and delivers a passive internal environment. The partially exposed concrete envelope provides thermal mass, while the overall energy consumption is lowered by natural/displacement ventilation and efficient lighting systems. The building's heat gain is regulated by digitally controlled external sunshades. The roof design is inspired by the traditional Korean Hanok, which facilitates rainwater collection and the reuse of grey water.

Click here to view the competition's winning proposal from Studio MADe. 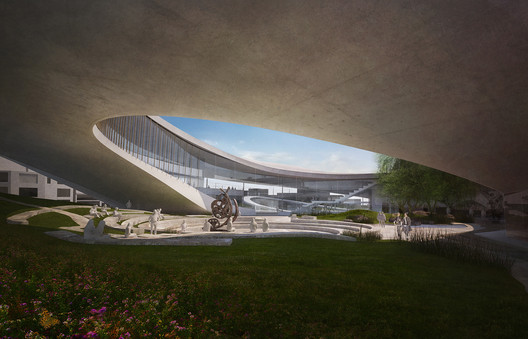