Agence Ter has won a competition to redesign the bank of the East Bund, adjacent to Pudong in Shanghai, reconstructing 21 kilometers of waterfront along the Huangpu River. Devising programmatic elements for five sections of the riverfront, Agence Ter hopes to inject a variety of functions into what is now an underutilized area. In the words of the designers, “The project redefines the space of the bank to create a living interface between neighborhoods and the river, a new width articulating soft transport, ecology, public spaces, activities and economy.” 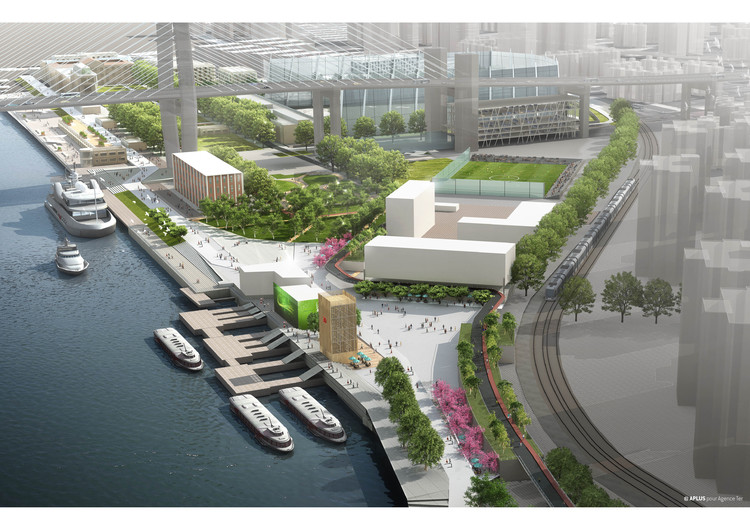 Organized into three main paths – discovery, main, and sports – the tripartite system will systematize flows and usage into continuous strands of movement across the site. Each of the paths will also be accompanied by new facilities to animate the bank and inspire new activities for the space. Agence Ter envisions a synthesis of everyday functions and nightlife, along with local and national events.

The Main Path will be a pedestrian promenade – the designers call it “the main artery of the project” – which will include temporary and permanent installations and services such as food stalls, playgrounds, and activity lawns. The Sports Path will be for cyclists, joggers, and active-life enthusiasts; amenities will include fitness training support, ping pong tables, and sports fields. The Discovery Path will be used to engage with the richness of the waterfront settings, offering insight on Shanghai’s natural, cultural, and architectural heritage. Each of the paths will afford views of the river and adjacent metropolis, and natural spaces throughout the project’s 350 hectares will highlight biodiversity and the protection of flora and fauna.

Addressing the challenge of designing 21 kilometers of landscape, Agence Ter’s proposal seeks to create specific solutions guided by the existing identity and ecology of differing riverfront locations. The designers will create spatial continuity through the use of terraces, canal overpasses, footbridges, and “landmarks” at kilometer markers, which the office has called “totems” – spaces that will be used for tourist information, as lookouts, restaurants, and to fulfill other purposes, all the while adding rhythm and flow to the parklands.

In reconnecting the Shanghainese to the Huangpu River, the office wishes to highlight existing and forthcoming river links in the form of harbor boats, cable cabin transport, and connections to the tramway and metro systems.

Agence Ter’s client for this project is Shanghai East Bund Investment Group Co, Ltd, and the project is a collaboration between the office and consultants JFA, SCS, AND Studio, and Concepto. Set to begin construction this year, the project will be completed in 2019. 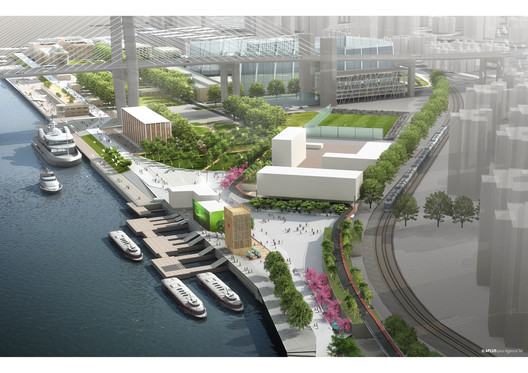