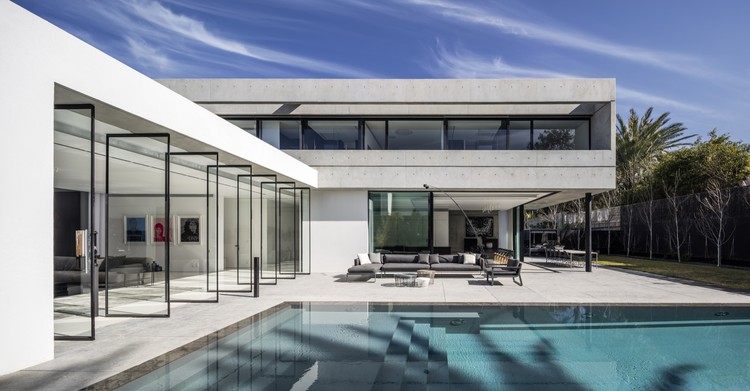 Text description provided by the architects. The skyline - the meeting of earth and heaven - is the Archimedean point in every swath of architecture that orients the building in its surrounding. Whether it be built in a dense urban fabric, on a high mountain or a narrow, deep canyon - each building is measured by its sky. Classical architecture that developed within the bosom of the church, aspired toward the sublime, the dimensions were propelled upwards by way of vertical windows and tall columns. In contrast, however, modern architecture, particularly residential constructions, see the skyline as a backdrop of human creativity, a horizontal emphasis on the buildings’ dimensions or even as a mere tool serving human needs.

In both the ancient and modern cases, the skyline is the simplest element required to place the building in a concrete context, even an imagined one. Second to that is the presence of another building and then trees and so on down the list of elements in the environment. Perhaps because of this, the architecture of private homes is the last bastion of the architecture of objects - not required to kowtow to its surroundings - it engages both architecture and sculpture.

Such is the S house located in --- . At first glance it is a hovering horizontal prism, emphasized by a double skyline - above and below. A second glance seeks out the meeting of the prism with the ground, attempting to decipher the system of physical balance that allows the composition to float while being anchored, as it were, to a horizontal concrete wall resting on a steel beam hovering above an English garden. The result is a choreographed construction held eternally in a gravity-defying pose.

The levitation of the prism, formed by clean lines, dictates the entirety of the grounds and entrance by way of transparent partitions of different types - dropping down toward and marking the ground. As such, the public spaces of the home - the dining room, kitchen, living room, garden and decorative pool - have their inner and outer boundaries entirely blurred. Similarly, the entrance from the street prepares the visitor for the “space vessel” with the aid of shutter-like walls of wood - forming an outdoor lobby - barely visible from the street and open to the interior of the house. A lobby which is built in proportion to the salon, inchoate as it were, formed by an additional mass of concrete that further amplifies the hovering prism.

The design of the lower floor is separate from the prism above, yet nonetheless balances it through cross sections with a certain constructive functionality. It is indeed a counterweight, a balance sheet or even technical anchor in every sense. It gives shelter to intimacy and privacy, housing the bedrooms and managing the inverted relationship to the environment, thereby establishing that this house is not only a virtuous object but a space around which life is calculated.