Montreal-based Provencher_Roy have released images of their designs for the restoration of Alexandra Pier and the Iberville International Passenger Terminal, currently under construction in Montreal's Old Port. The new terminal will accommodate the operational needs of the modern cruise ship, offering tourists a new entrance into the historic heart of the city, and will provide residents with a new promenade and public space integrated smoothly into the existing urban fabric. 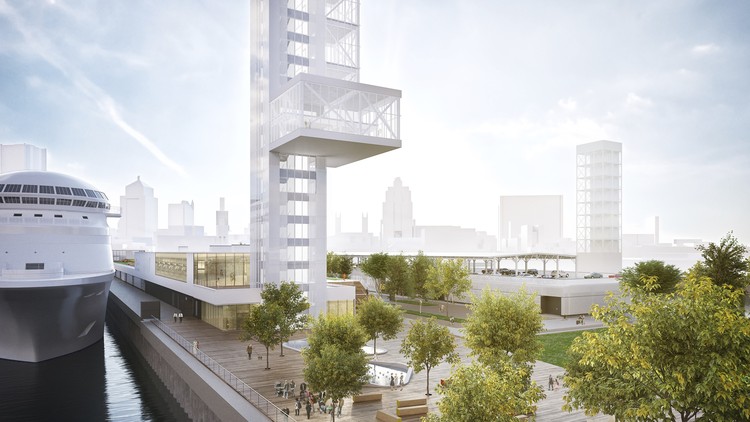 The 305 by 91 meter Alexandra Pier has existed for over one hundred years, and in 1967, the Iberville Terminal started serving exclusively as a port for receiving cruise passengers. The pier was never particularly pedestrian-friendly, however, and in recent years the site’s vital infrastructures began to show advanced signs of aging and difficulty meeting the demands of the city’s ever-growing tourism industry. It was at this point that the Montreal Port Authority called upon Provencher_Roy to redesign the pier to serve both tourists and Montreal citizens.

“This is a structuring project for the tourism industry, as well as for residents and visitors of Old Montréal, who will benefit from the revitalization of the Alexandra Pier facilities,” says Claude Provencher, architect and senior partner at Provencher_Roy.

The terminal design emphasizes pedestrian circulation and an injection of greenery to the site, replacing paved surfaces with a landscaped green space on the roof of the terminal building and tree plantings throughout. To improve traffic flow, continuous-loop vehicular lanes have been designed to simplify passenger drop-off and pick-up. Additionally, pedestrian and vehicular paths have been separated to allow people to walk around the site uninhibited, while benches and forum stairs give visitors a chance to relax and rest their feet.

“From the project's outset, our aim was to extend the Old Port's linear park onto the pier,” says Sonia Gagné, architect and partner at Provencher_Roy. “We wanted to create a space that emphasizes the historical richness of the site while also providing a park, a place to relax, and a space that people could make their own.”

In addition to the terminal redesign, the pier will feature a sleek observation tower that will serve as a new beacon to the Old Port, welcoming visitors into Montreal and becoming a new landmark for the area. The tower’s elevated viewing platforms will provide views to the water and the city, and its base will serve as a transitional element between the maritime terminal and the park located at the tip of the pier.

The 25,000 square meter project is slated to be completed in 2017, marking the 375th anniversary of the founding of Montreal. 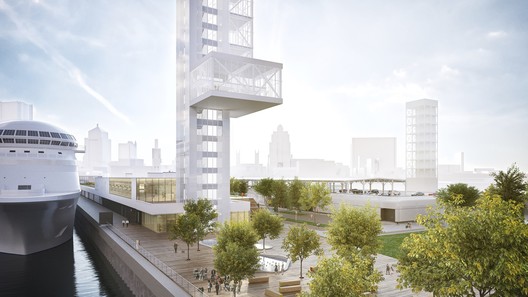