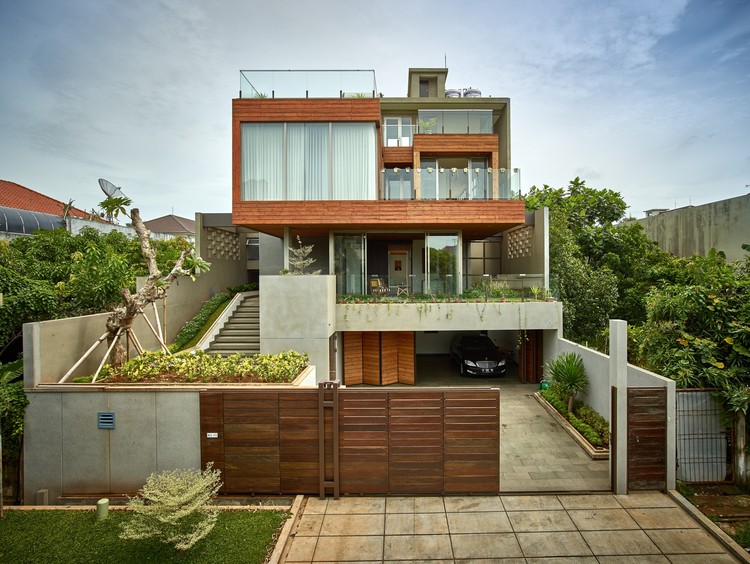 Text description provided by the architects. Located in Puri Indah, West Jakarta region, the tropical open house creates intimate space from entrance through void in the garden, in living room, library, and the roof top garden.

"I want a house. A house to retreat, to relax with my family," explains homeowner Mr. Wirawan in his brief to Realrich Sjarief. Situated in the increasingly crowded West Jakarta area, the 500 sqm house occupies a 450 sqm plot of land. Reflected by owner's name, Wirawan House forest wood, Size-wise it is inconspicuous, but its exposed brassed wood facade gives it a humble look.

The architecture of Tropical Open House separated the service on the ground floor, lifted the building floats with living room, and master bedroom on the first floor and bedroom for three children in the second floor. The composition is designed by designing multiple small landscape based on view from each intimate spaces, this way the heat is reduced by facing the opening to the north south side while opening the skylight and the window to let air and light in. The house has one receiving area then no more separation wall at the first floor which is living room. In the living room, the kitchen also takes some importance its final layout is the result of few adjustments based on the owner's domestic habits. The only enclosed space in the second storey is Wirawan's study, which doubles as a library and his space to remember memory for his family. A simple foyer and a light well integrated with stair, and art work is placed after the receiving area. The second story houses private spaces. At the end of the corridor is 2 bedrooms of his daughter's equipped with suite bathroom and a walk-in closet. An outdoor feel showering area is attached to the bathroom, while the surface connecting its indoor and outdoor area is made of clear glass. The material used in this building is choosed based on the best craftmenship available in Jakarta.

5 types of local Wood was picked based on each unique character. First is, dried pine wood 180 mm x 30 mm x 3000 mm, for the facade, and 85 mm x 10 mm x 3000 mm for the ceiling. Pine wood was chosed because of the durability and the lightness. Second, reused Iron wood which is most durable material used for phinisi boat, combined with bengkirai wood which is more economic for the less walkable space is used for indoor - outdoor decking because of the texture, durability, and economic. Teakwood is used for main area bedroom, library, and foyer area, and merbau wood 300mm x 480 mm x 2800 mm combined in single door is used for door because of its tolerance on expansion, the most available material in Jakarta.

An additional bedroom, bathroom and a multi function room linked by a corridor leading to an open space beside the void leading to the stairwell and stair case, a pretty bow to knot the horizontal and vertical circulations together. The project installed storm water harvesting and reuses it in water landscaping. While storm water harvesting is increasingly common in some countries, it is still a rare, exceptional facility in Indonesia, one that this project was determined to have in this home. The attention of to the play of light and shadow, created through a combination of materials and artificial and natural light is fundamental to the design of the house and evokes the quietude of such a retreat house which stated by its architecture.