Save
Video: Reiulf Ramstad Explains "The Nordic Way of Building"
Share
Or
Copy

“We believe that architecture makes sense when it’s anchored in the locales where it’s built, and the people who are going to use it. That’s why I’m not so occupied with the zeitgeist of architecture.”

In this interview from Louisiana Channel, Oslo-based architect Reiulf Ramstad discusses how the Scandinavian landscape is at the core of his design concepts. In a context of globalization, increased mobility, and communication medias, Ramstad believes “the depth of the locale becomes shallow.” His architecture contrasts this mainstream approach by offering designs specifically tailored to Norwegian cultural heritage and the landscape of its remote areas.

Ramstad first introduces his project for the National Tourist Route in Trollstigen, an opportunity to build in one of Norway’s most impressive landscapes. Norway is one of the rare places where untouched nature is familiar, so Ramstad wanted visitors to feel surrounded by the larger landscape space. He explains that his design strategy was to clarify what is natural from what is man-made. The project is “more a landscape than a singular building or a bridge,” as it takes almost 30 minutes to walk from one place to the other. In designing the project, Ramstad explored the “value of depth of time,” which he further identified during the construction process because of the difficulty of dealing with nature’s brutality: “We erected test elements and when we came back the following year, they were gone. I believe we’ll need that insight in the years to come because the climate will change, the weather will be more brutal, so that way of testing architecture through the Trollstigen project has given us a lot of experience.”

With his Split View Mountain Lodge project, Ramstad explored Norway’s well-established culture of cabins as second homes. As he says, “the holiday cabins that are made become a kind of suburbia and in a way the natural landscape turns into a slum because people want to bring the same lifestyle with them into nature.” In contrast, Ramstad thinks that a house built in a natural setting should be the opposite of the urban house. The Split View project is “anchored in the locale so that you almost get the feeling of being outside,” and “some of the windows are created in such a way that when you’re inside there’s just a climate membrane between you and nature. The glass is fixed so that you don’t see the frame to bring it closer.”

The video further outlines some of Ramstad's projects – the Square House Veierland, Community Church Knarvik, Romsdal Folk Museum, and Selvika National Tourist Route – while the architect highlights how the climate has made him very pragmatic, and how, in contrast to today’s global context, “In the Nordic societies people will live ever closer" adding that he is "convinced that quality of life is not necessarily connected to the abundance of space or quantity.” 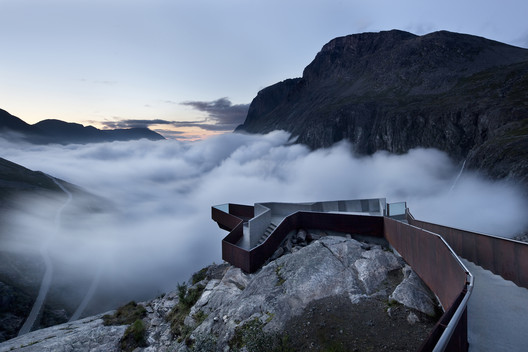