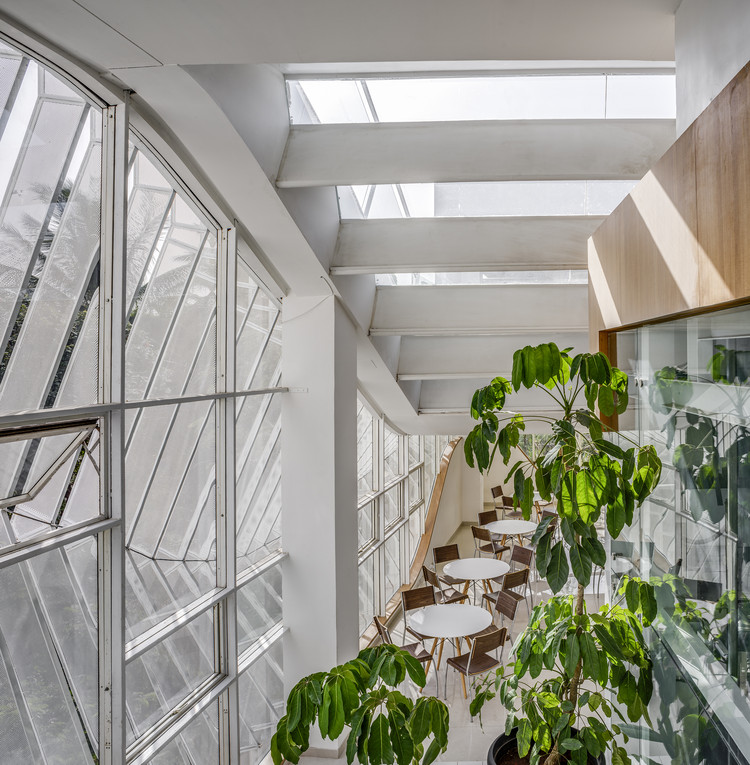 Text description provided by the architects. The site is a small trapezoidal piece of expensive real estate roughly measuring around 500 square meters situated on an arterial commercial road in Pune, India. The brief called for utilizing maximum allowable FAR with minimum wastage of space, and yet, to create a building that could make its presence felt in its neighborhood of high rise buildings.

The program is essentially to house the regional corporate office of a quasi banking institution. It consists of a travel agency with direct interface to the street, a banking floor with strong room and a couple of office floors, including the chairman's lounge, conference and meeting rooms. To this mix of program, the architects have added a cafeteria on the top floor. An amphitheater, accommodating the lift room shafts and a terrace garden completes the building.The design is articulated through several simple moves that add layers of complexity to the building.

Being a small site, the resultant building form is an extrusion of the trapezoid of roughly 8 meters x 23 meters, that is derived after factoring in the side margins mandated by development norms.

The strategy is to manipulate the building sectionally, and then this sectional articulation manifests on the facade through the fenestration and a climate responsive skin.

The circulation core is placed in the center with the east and west wings on either side. This sectionally displaces the western side by half a floor height, allowing for a multi-level mechanical parking to be accommodated below.

Two glass lifts, housed back to back in a common core, service the eastern and western blocks. The staircase becomes a connecting diagonal thread linking the two wings. This sectional move allows for the building to get seamlessly connected, visually as well as physically across floors. Programs occur at every half level thus increasing the vertical accessibility across floors, and reducing the usage of lifts.

The residual space in the Center is articulated as an atrium that further heightens the visual connect of the interior spaces.  The atrium also has uninterrupted glazing on the south side, that connects the interiors with the treescape outside. Two stepped landscaped spaces are suspended in the atrium, additionally connecting the two wings. One connects the reception area with the office floor, and the other connects the cafeteria with the terrace garden.

Programs are distributed across the section enabling interaction between the various functions with the ones requiring public interface, closer to the ground. The eastern wing houses all the executive offices and conference rooms and the western wing houses the work stations.

The cafeteria has a roof that transforms into a skylight and also accommodates the lift headroom in one seamless sweep. This skylight, made of steel and glass is configured as an open air amphitheater on the terrace that could accommodate up to a hundred people.

The amphitheater, terrace garden on the eastern side and the cafeteria below, function as a constellation of public spaces at the top of the building. These public spaces were not a part of the clients brief or requirements. These were inserted by the architects to add value to an otherwise banal set of office requirements and to create a small realm of semi-public spaces accessible to  citizens in the center of the town. It is imagined that, in time, these spaces will insert themselves in the social fabric of the local community, helping the institution's out-reach to its customers and beyond.

The primary building envelope is composed of alternating bands of 200 mm thick masonry walls and sinuous ribbon windows. The Windows seamlessly widen into floor height glazing and narrow down to thin bands. The continuous variation of the ribbon windows is in response to several climatic, programmatic and contextual parameters.

The windows narrow down to thin ribbons on the southern and western sides, where maximum heat gain occurs, and they span the entire walls, from floor to ceiling, on the northern and eastern facades to allow diffused light with minimum heat gain.

The windows also widen near the atrium on the southern facade, allowing for it to be seamlessly integrated with the trees outside, and providing the atrium and its terrace gardens with abundant light, and views of the surroundings. As the glazed windows widen in the atrium, they also start intersecting one another, and the atrium is thus articulated as the place where the distinctions between the different floor plates gets merged, formally as well as programmatically.

What is essentially a simple box, with split levels and an atrium is articulated as a smooth seamless space. This is further enhanced by a skin of vertical fins in perforated steel that cover the building on the southern and south eastern facades. These fins curve out when they encounter the window ribbons, allowing for the openable shutters to be operated. As the ribbon widens, the fins respond by moving away from the building, generating a dynamic facade of continuous variation.

These fins temper the harsh southern sun that hits the building, and allow a more nuanced filtered light into the interiors. They also create an array of light effects that animate the exteriors and interiors of the building, as the sun moves across the sky, or as one moves around the building.

The building is an amalgam of layers of diverse programmatic, contextual and climatic responses that results in an interior scape that simultaneously offers privacy and identity to the various functions, while also interconnects them through the use of transparency, split levels, atriums and landscapes.

These sectional manipulations and the resultant interior spatial experiences are expressed on the exteriors through the use of climate responsive windows and a skin, creating a structure that partially reveals and hints at its interiors as well as intrigues and engages the onlooker for a deeper exploration. 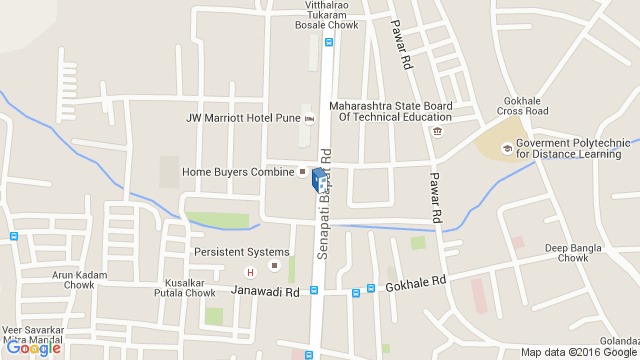 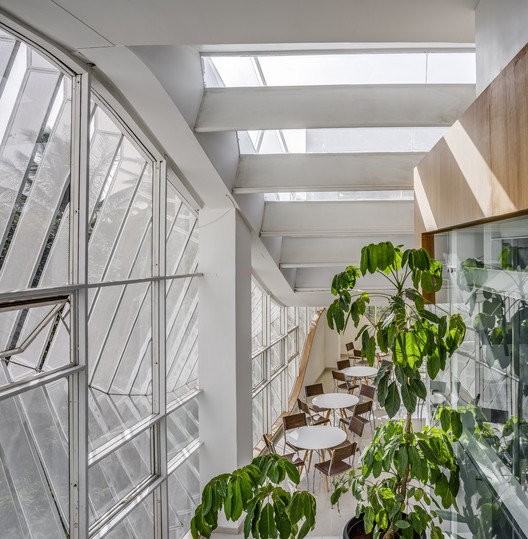