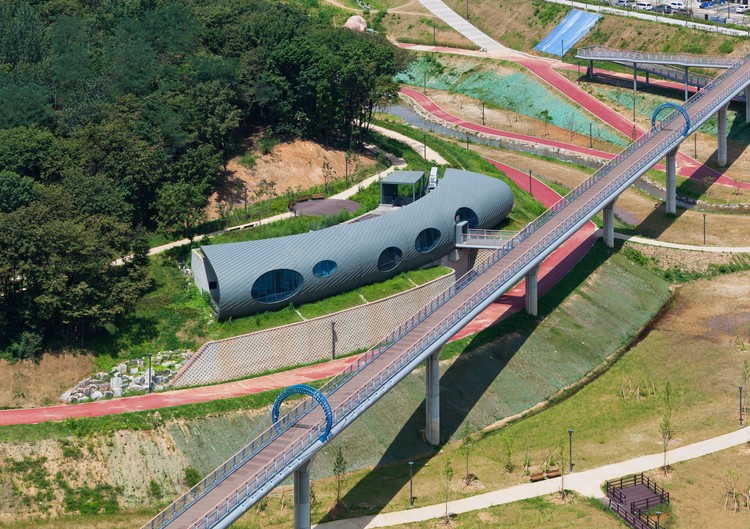 Text description provided by the architects. This project considers the Gaon Lake Park in which the building is located as a significant contextual reference. The large park is sitting in the middle of a huge neighborhood with apartment complexes, two hours from Seoul metropolitan area. This unique type of construction is typical of Korean urban development—building and selling thousands of housing units at one time. Although this type of development contains potential negative side effects for the future, the landscape is more positively designed than the apartment complexes in preserving the natural wetland which is left as the original entity in the park.

The design focus is on the conflict created between the pedestrian bridge and the original topographical relationship. It was an unavoidable assignment to precisely fabricate the connection from the bridge to an “almost accidentally given” site. As the massive urban development left the back-side hill of the building as an “isolated green area,” the dissonant relationship paradoxically becomes a clue for positioning the building by visualizing this conflict.

This pavilion functions mainly for the exhibition and administrative offices of the park. Considering the pedestrian accesses and the functional use, the radio of the arcs which are casted on different levels formalize the hidden tension of two contrasting entities—the linear pedestrian bridge and the natural topography. From the tensional relationship, the front curved façade visualizes a symbolic “barrier” containing the program. As the continuous hallway connects the functional spaces, the inner layer behind the hallway has a series of rooms, a staircase, restrooms and a sunken garden.

Using the different access levels between the front and backside entries, the curved wall controls the degree of visual continuity toward the opened park. Visitors on the roof can look down into the hallway and towards the park through the clerestory. In contrary to the pedestrian bridge giving an open wide view to the park, the visitors visually engages the inner side of the building on the roof. The window portals on the curved wall are carved out from cylindrical intersections to have a series of segmental flat surfaces. While the portals puncture through the hard northern elevation, offering wide panoramic views of the reserve and cityscape, a southern-facing clerestory allows ample sunlight to illuminate the inside all day long. Natural wood planks cover the interior of the curved sur-face to create a warm ambiance contrasting the rectilinear hardness of material. 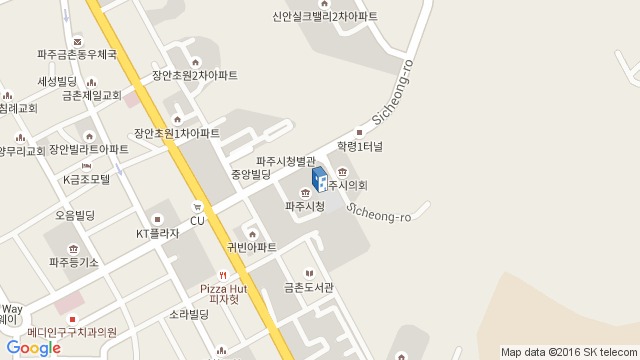