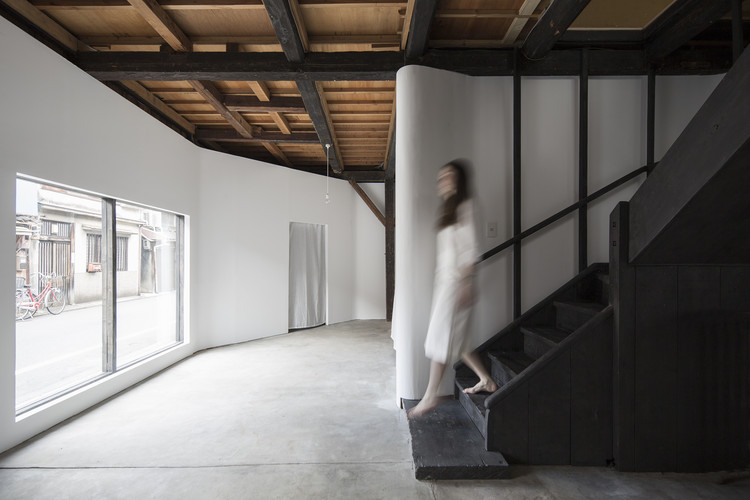 Text description provided by the architects. The purpose of this renovation project of a late nineteenth century building in Kyoto is to renew the reception area of a guesthouse, Kaikoan (http://kaikoan.jp/en/stay), and to create a new space for a costume rental shop. Due to the differences of programs, the upper level and the lower level bring distinct atmospheres to the users.

The lower level, which is used for the reception, is a public area of the building and has a more open atmosphere. The existing columns and beams, which were formerly hidden behind panels, are now exposed with a continuous white painted wall. The new wall is featured with rounded corners and wraps around the columns. This brings an ambiguous quality to the wall: it is solid but at the same time feels like fabric. Additionally, the white colour of the wall and its height at the underside level of the beams provide a strong contrast to the space. This design feature detaches the wall from the original elements, allowing the post and beam structure to retain openness.

The upper level is designed for the costume rental shop, which includes a waiting room, a changing room, a makeup and hair-setting area. In response to the white colour of the exterior wall, the existing interior finishes of the peripheral walls and the ceiling are also painted in white. With this design feature, the space is presented like a floating white volume, an intimate space as if it is scooped out from a mass. The quality of the space is further enhanced by the apertures  which, in contrast to the full height openings on the lower level, are holes in the wall. The columns, beams and walls other than those on the periphery are left as they are, being treated as separate elements distinct from the white volume.