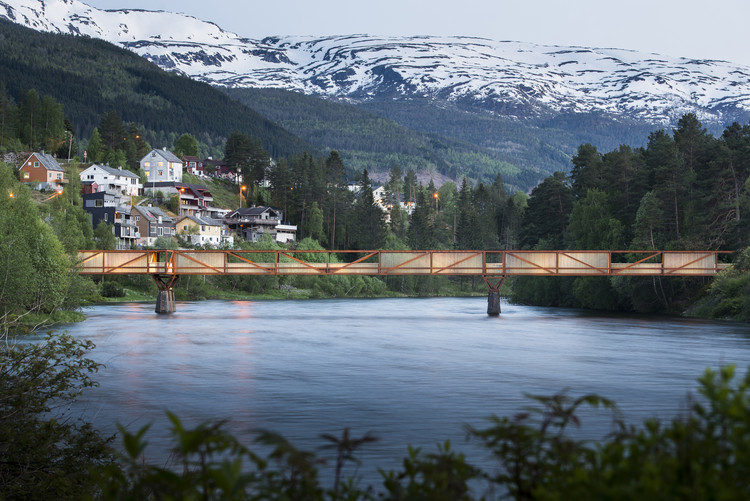 In the spring of 2015 the the municipality of Voss, a municipality in western Norway, invited entrepreneurs and architects to participate in tenders for a pedestrian bridge over the river Vosso. The bridge was to replace a historic bridge, which had been taken by a flood in the river the previous year. The team of IKM Steel & Facade, SK Langeland and Rintala Eggertsson Architects won the competition with a steel lattice bridge in cor-ten steel and wooden floors, walls and ceilings in wood.

It was an important for the client to provide the pedestrians with enough visibility to the powerful nature in the area. The river is also a good fishing river, which has proved to be a source of recreation for the local population where the old bridge was an important a basecamp of activities. This was something the municipality wanted to incorporate in the design of the new bridge.

The main steel structure would form the base rhythm and the wooden structure a secondary movement, similar to what you would find in a score for percussion instruments. The two rooms on top of the pillars were therefore used to generate pauses in this otherwise regular rhythm, offering a break from the linear movement across and a possibility of more direct contact with the landscape. They were also ideal as fishing platforms as the two activities would not need to disturb each other anymore.

The old bridge which collapsed in the river flooding was a suspension bridge with a clear visual language. That clarity was an important point of departure for us in the design of the new bridge. But given the two main materials, steel and wood, it became natural to differentiate between the inside and the outside and offer the two materials different roles so to play. The steel would express the raw forces going through the bearing structure on the outside and the other would communicate sensorial information on a human scale on the inside.

As it often is the case with bridges, maintenance was an important issue for the client. They were therefore very intrigued by the idea of using Cor-ten steel as a main structure and Accoya as a cladding material. That would combine strength, durability and above all no costs of maintenance over the years. They also liked the idea of covering the bridge with a roof, which would eliminate the need of snow plowing, which can be complicated issue for pedestrian bridges. 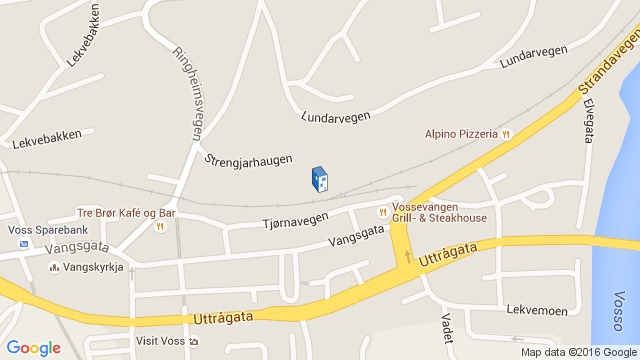 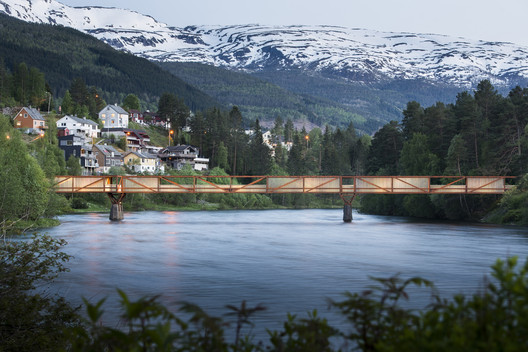