Save
Cultural Centre in Bakar / Randić and Associates 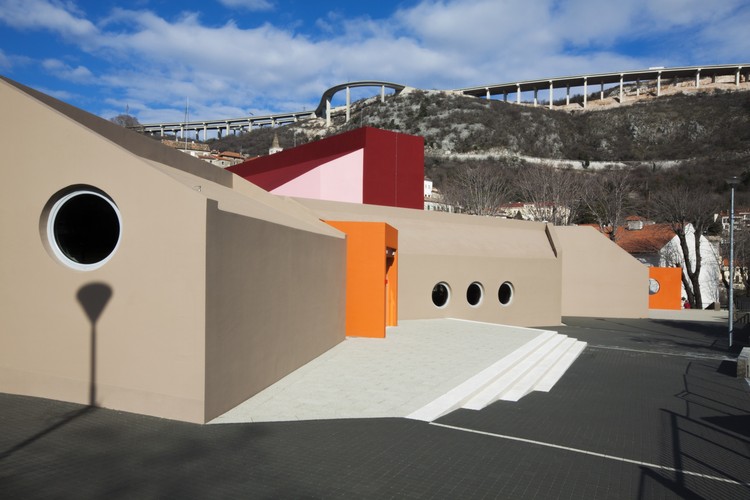 Text description provided by the architects. Cultural Centre in Bakar, a historical town on the north Adriatic coast, was originally built as Community Centre during the 1970’s. Community Centre’s had a significant role in the society, designated for diffusion of culture in smaller communities.

Various characteristics of socialist political and cultural environment have contributed to their outspread.

Culture had a clearly defined ideological position as part of the social Superstructure, so it had resources to stimulate different forms of cultural production and social activity. Cultural activity was not limited to art alone, but it has encompassed other activities including education. Lifelong learning courses have been regularly organized in Community Centers.

Next to it, traditional social gatherings took place in the Centre, taking the role that National Houses had in the pre-socialist society.

All of this has made Community Centers most important buildings in the municipalities, recognized as the center of a community. For that reason they have been usually built as oversized and monumental buildings.

Community Centers have been usually constructed in cities built on post-war industrialization, contrasting both elements of the Marxist cultural theory, Base, representing industrial production, and Superstructure, housed in Community Centre. The building in Bakar follows the same pattern. During the 1970’s, landscape surrounding the medieval town was dominated by heavy industry. Architecture of the Community Centre seemed to have responded to neighboring scale and form of industrial plants and port infrastructure. The building was divided in several parts, typical for Community Centers of the period; central hall for events, offices for municipal administration, rooms for civil societies and communal area with café and a bowling alley.

The industry has disappeared with the transitional processes of the 1990’s, but so has the social environment that has enabled activity in the Centre.  Like in many other post-socialist locations, the change in cultural policy has emptied the budget, leaving a structure too big for contemporary needs.

The building was gradually decaying and largely out of use, until the reconstruction works began in 2012.

Restoration approach is embracing the fact this is an oversized building with an expressive geometry.

Interior of the building is cleared of all partitions, creating one big covered space, opening to the surrounding terrain. Without a fixed set of activities, unlike from the period when it was built, the building is conceived as an empty shell that can accommodate various programs. It is a generous covered public space, periodically colonized with municipal events and gatherings.  Structural wall is dividing the interior in two, concert hall on one side and a large open space on the other, housing workshops, café and area available to local NGO’s.

Expressive shape of the building, previously covered with metal panels, has been reduced to basic geometrical shapes, emphasized with colors.

Recent selection of the neighboring city of Rijeka as European Culture Capital for 2020, creates a new environment and condition where culture represents an agency for a once strong industrial region to reinvent itself. Cultural Centre offers to the city of Bakar an opportunity to take part in these processes. 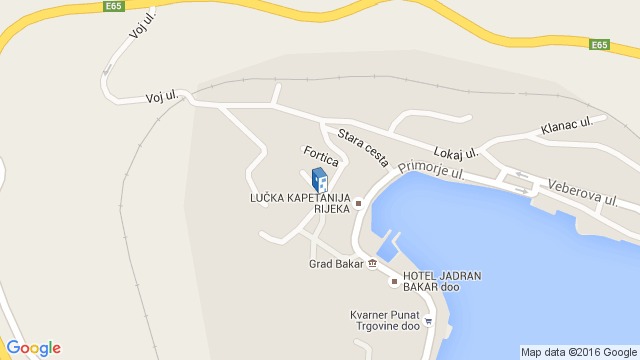 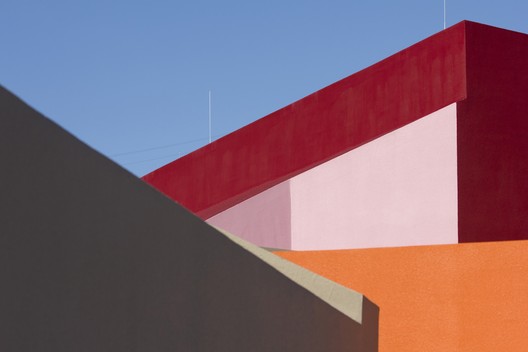 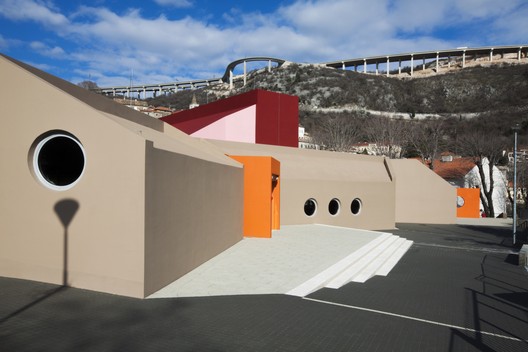