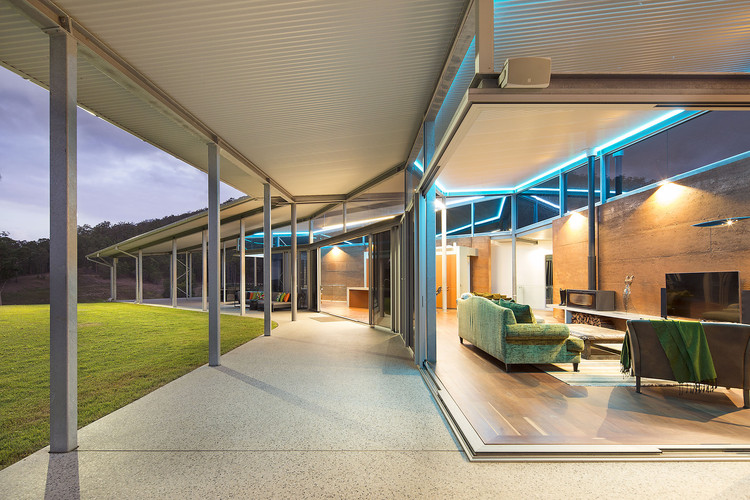 Text description provided by the architects. Reflections at Camp Mountain is a modern rural farm house.

The building sits atop a spur at the foot of Camp Mountain surrounded by 360 degrees views yet secluded from the world.

The house was sited on the southern edge so as to create a usable north-facing plateau in front of the house over looking the valley and hills beyond.

The geometry resulting from the angles in both plan and elevation offers protection and a multitude of reflections as the sunlight changes throughout the day and present the occupants a full immersion of the given external climatic conditions.

Externally, the hills, horizon and sky reflect themselves constantly from various angles in the glazing and the transparency of the clerestory, which provides a view of the surrounding hills behind extending the sky at sunrise and sunsets.

Deep bored piers and a high retaining walls anchor the basement storey to the crest of the hill and allow the first level to surface as single to the courtyard.

The plan is dissected by two rammed earth walls, which define the private and public zones, enriching the interiors with its earthy color of soil from the site.

The warmth of timber floors inside and polished concrete floors outside, the texture of the earth walls contrast with the exposed steel frame, frameless glazing system reflecting on the rural nature of the modern rural farmhouse.

The plan is also mirrored almost symmetrically along a north south axis defining the living / parent zone living and children / dining wing areas and the kitchen being at the heart of the house straddles the center area with its teardrop concrete bench.

The boomerang shape roof hovers over the steel frame structure becoming almost invisible from eye height and harvests the water then drawn the underground water tanks.

At night the changing colored LED lights reflecting in the clerestory add another dimension of geometry and myriad of refractions of the interior and exterior.

The house and sky also reflects itself in the pool. Providing opportunity for play and reflection and admiration by the proud owner builder. 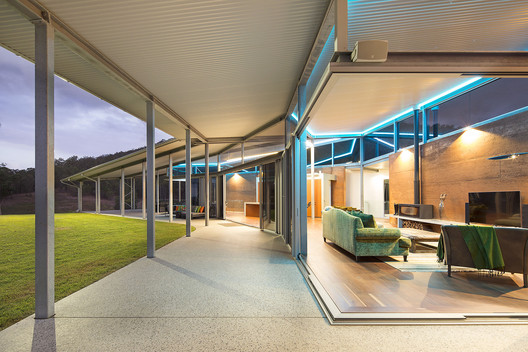