Save
Selfie Automaton: Inside Romania's Pavilion at the 2016 Venice Biennale
Presented by:

The Romanian Pavilion at the 15th International Architecture Exhibition — La Biennale di Venezia showcases “Selfie Automaton”, an exhibition by Tiberiu Bucșa, Gál Orsolya, Stathis Markopoulos, Adrian Aramă, Oana Matei, Andrei Durloi. The exhibition consists of 7 mechanical automata, featuring 42 built in marionetes — 37 human and 5 creatures. Three of the automata will be placed in the Romanian Pavilion in Giardini, another three in the New Gallery of the Romanian Institute of Culture and Humanistic Research, and one nomad that will wander through the streets of Venice. 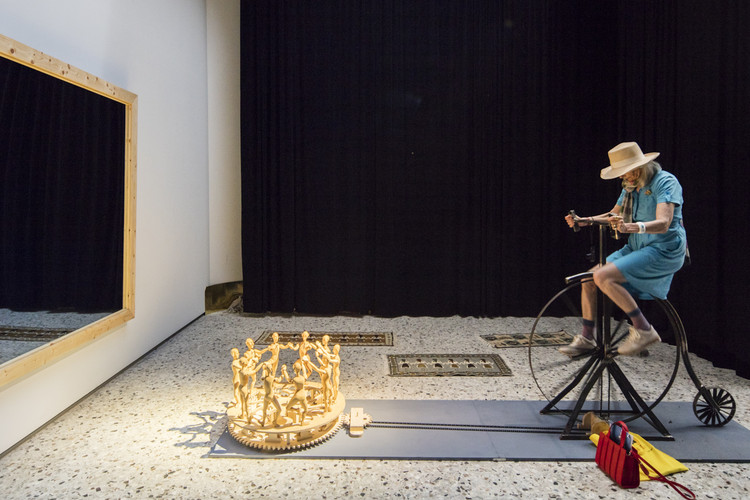 Caricatures of characters, fantastic animals, golden eggs, music boxes and mirrored reflections are assembled in predefined show parts that place the visitor on stage, in various positions, as dynamo and puppet in the same time. The authors thus propose a generic portrait of social relations, stereotypes and wishes, broken into pieces, to be reassembled by the user’s imagination, in an introspective self-portrait, or perhaps a selfie. It could be all just entertainment or it can be seen as an absurd show. It raises a few questions, but it certainly does not give answers.

To define the role that was given to marionettes in the exhibition, the authors of “Selfie Automaton” approached puppetry, where it is common for the manipulator to play with the meanings and possibilities of control. One is that the marionette can, and should, cross the usual human limits, of gravity for example, as it can jump and remain suspended. Another, to a tragic extreme, is to let it become aware of its manipulator and cut, or not, its own strings. Still, no such possibilities of escape were used for the installations. Even though constructed with the necessary joints that would allow them the “freedom of movement”, the wooden puppets are unstrung and literally nailed into a mechanism that allows them nothing but one predefined repetitive movement. And the visitor is no exception. Seated as part of the automaton, he is given one choice only: to make it work, by his own repetitive action.

Consequently, the comfortable bipolar stereotype of the manipulated (us) and the manipulator (them) – most often placing people’ actions at one end of the string, as humble and direct consequences of an unexplained exterior force responsible for them – is replaced by a system of closed choices, built in a series of automata. The exhibition takes these two directions further, by positioning the visitor in various relations with its objects of entertainment and himself, from leaving him the comfort or discomfort of the distant observer, up to making him a giant ballerina in a micro banquet, a victim of a Kafka-like commission, or a beggar of wishes.

Handles and pedals make the various shows possible, when provided with one human power. An apparent system of gearwheels transmit the motion to cyclical scenes: a bicycle is moving a circle dance, a cooking pot generates a “grand buffet”, a crank awakens a commission or a never ending fight, a turning handle moves a golden sh, a golden hen, or a flying bird – prisoner outside its cage.

“Selfie Automaton” reflects on the characters and actions embodied by the puppets that are nothing but dispersed parts of our own and can be combined or split, in search of a self-portrait, be it of an architect or of anyone else.

What remains, still, is the question of predetermined patterns. Whether they really exist, whether we are part of them, their victims or their generators.

Initiated by
Plus Minus Association, Romania