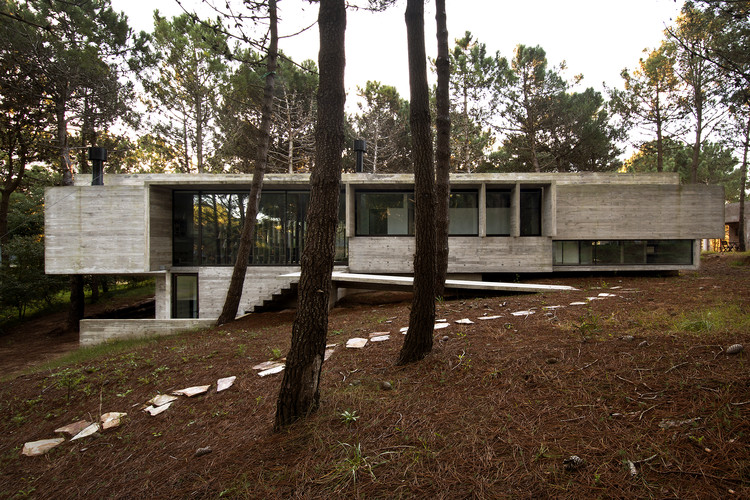 The place
It is ground in a new development, with lush vegetation and crossed by tall dunes. The lot allows a dual income through a cul de sac at its narrowest or from the street on the opposite front. The peculiarity is that in both situations the sharp difference in height between the street and the lot becomes difficult access to the house.

The customers order was a house to move into at different times of the year that would have four bedrooms, the master with en-suite bathroom, two for the children with a shared bathroom (with multiple places to sleep as they are often accompanied by friends) and a fourth bedroom for guests with some independence, also with bathroom. The meeting place should be integrated with the kitchen and be as generous as possible. A reservoir for saving different beach items and a semi-covered garage is also required.

The proposal
It is certainly the particular batch already described, which gives uniqueness to this home.

His sharp relief, the characteristics of its accessibility, quantity, quality and position of its trees were crucial project issues.

The house was planned as a compact volume that could be located in the existing forest glade. Since this place matched the highest point of the property, it was decided to solve all the main rooms on that level giving to them an overview and the possibility to extend to the outside through generous expansions.

Following this first decision was proposed to place part of the program (in this case the sector guests) at a lower level for a smaller plant and resolve this function the height difference of the main floor with access to the lot.

The resulting prism has two very distinct façades, facing SE, quite closed with one major breach in the social sector access; the opposite, the NO, large openings, determined with a series of vertical partitions not reach the floor. This resource provides unity to a façade that has different uses, as well as give some privacy to environments and protects the incidence of sunlight directly over the openings.

The functional organization
You enter the property from the cul de sac, and that level garage, storage and access to guest sector appears. Going up a level through a concrete staircase you get to the main floor. Once you are inside the area aside of bedrooms and bathrooms and to the opposite side, the staircase that descends to the guest sector so that it is connected to the rest of the house if so required.

Construction
The house is built with two basic materials: exposed concrete and glass.

The exposed concrete structure is, cladding and floor and has no external termination, interior.

The structural proposal is simple: it is supported by inverted slabs or simple beams, except in one end of the prism which is solved with a major cantilever column to release the access area.

The cover is solved by simply giving a minimum slope to the last slab to rapidly produce runoff of rainwater. H21 concrete was used with the addition of a fluidizing to this mixture with small amount of water, when dried, resulting not very compact and require sealing. The few hollow brick interior walls are plastered and painted, the floor is concrete screed cloths divided by plates of aluminum.

Furniture
Except the double bed, armchairs and chairs, the rest of the equipment of this property is resolved in concrete. Even the beds of the secondary bedrooms are resolved perforated cantilever slabs.