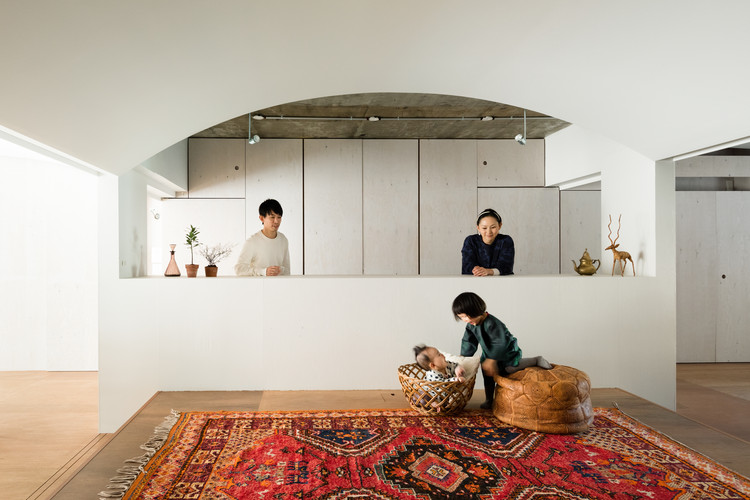 Text description provided by the architects. This is a renovation project of an apartment in downtown Tokyo.The client said unintentionally that they want to spend a brilliant time together nowhere else but in their house. Then I thought, “Indeed”. I always find that houses around us are way too far from the reality of each family life and communities, and they all look alike. It seems as if there were no identity in family life, which is ridiculous.

Family is another personality of one’s life. I would like to come and go freely between two subjects, me and my family, just like ironing my shirts while paying attention to children, gathering and having dinner all at once, humming after a song sung in another room, talking to someone lying down on a same floor, and so on. This is a value of Team Living, I believe.

Therefore, I thought it is completely different from the value they desire to give some divided spaces for an artificial family circle and privacy to each member by making ordinary LDK(typical way of planning in japan) and private rooms.

Think one’s activity as one unity, and he will find that the unity contains other personalities and the environment beside him. Let me call the unity “a team” that he can act together with. Then, the team would keep trading its member as the activity changes, and he would never be alone. Even a bench on which he is absorbed in reading, the light diffused under the ceiling, and the presence of his mother ironing that he feels slightly, all of these can be called a team. Thinking the team that contains the others and the environment as one subject in this manner, he would naturally accept his friends, children in his neighbor, and even a guest visiting his wife who is a manicurist into his team, and spend some time with them. Therefore, I thought I should make a house that produces a positive attitude as he can perceive the others a part of himself.

This house is like a whole living room but slightly divided into various environments to support each member of the family to behave in his/her own way. Literally, there appeared no private room in this house. Usually, private rooms are provided for each member of the family to place beds, desks, and closets at random, but in this house, all the space except the bathroom is shared among the family as common for everyone’s use because every function is integrated into each place. For example, beds are all in Bedroom and desks are all in a Study desk, closets are all in Family closet, and so on. As if it was a matter of course, a man is recognized, physically or socially, as an individual. However it is possibly can be said that he, as a matter of fact, always belongs to a team that is born when he accept the others and the environment as spatial resource. It is not he as individual but the very team that takes the initiative in renewing daily life.

The apartment is located near highway, and surrounded with other massive apartments also built in 70’s, and the verticalization and densification caused by this development left some parking lots in the area as its surplus. The scene, a series of building elevations repeated with windows same size as the parking lots full with cars, seems a bit plain.

It had been 20 years since this flat was renovated for the first time, so the plan I made this time is the third generation for this flat. Referring to the first and second, both are planed in a same way that is dividing the given inner space into private rooms, and the composition of internal space is unrelated to the outside.

On the other hand, since this flat is on the fifth floor, I could see greens remained between buildings through the south window. Through the north window, I could hear the neighbors talking to the other neighbor walking on the ground. Soon I found the atmosphere is somehow a bit adorable. Then, I wondered if this house could be an organic space connecting a flat of an apartment to the urban space as long as it could adopt the friendly environment and phenomenon outside into the inner space, which is, so to speak, relocation in architectural composition.

According to the principle of the apartment, the openings could not be touched. Instead, triple-vault ceiling is provided in order to draw the outer environment into the inside. As dissolving a feeling of pressure that huge beams give, which is often found in the apartment in this generation, the ceiling height, originally was set low, was transformed into space with a variety of sectional figure, and thus whole space of the flat is connected, while divided.

The light from the outside is bounded on the floor and brought into the inner space by the triple-vault. The center of the flat that originally was the darkest in the flat is filled with the diffused light and wind passing through. This new linkage with the outer environment brings the flat a pleasant atmosphere.  Spaces are expanded into different directions since floors go up and down and space also is slid. The house also has flat ceilings, which helps it add more various conditions, and along with that a man creates his own behaviors. Sun-living where the family takes seats at a dinning table feeling the green outside, and Raised-floor-living having obtained both intimacy and openness by a view of an entire house, and a bath-living for doing household right next to a huge void of the urban space. All of these has a high migration with more than two ways in and out, and the house became spontaneous, interacted with adjacency space. 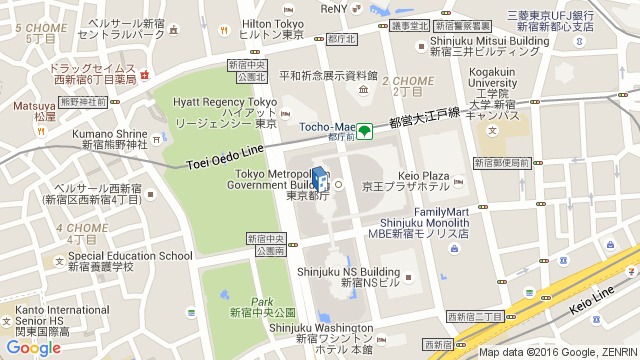