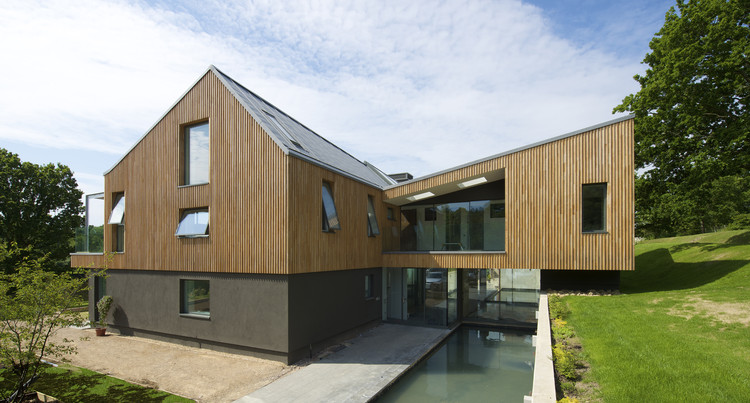 Text description provided by the architects. BBM were commissioned in 2008 to propose a sustainable master plan for a country estate in East Sussex. Our client wanted us to consider the viability of developing a derelict 1940’s dairy, retrofitting and extending a 1970’s house and a 19th Century Oast House situated next to each other. Working with Studio Engleback, who produced a parallel strategy for the surrounding landscape, the challenge was to create a low energy development from a brief that is traditionally extremely energy hungry, i.e. a new heated swimming pool with steam room and sauna, an external ‘natural pool’, and a high specification country house set in 275 acres of Wealden countryside that includes a lake and 150 acres of standing coppice woodland.

BBM & Studio Engleback came up with a low carbon strategy for this normally high carbon programme. It was agreed that local construction materials would be used, that the buildings would be extremely well sealed and insulated, and that a mixture of heavyweight and lightweight materials would be used to make the most of their abilities to store heat or insulate.

Our clients’ woodland is also the source of woodchip for the new biomass boiler that provides energy for heating the whole site. Nearby woodlands have also provided timber for cladding the dwelling and pool house inside and out, as well as providing joinery. Waste timber also forms the majority of the external wall and roof insulation. Designing a heated pool house plus sauna and steam room predominately out of timber products was particularly challenging, and we think, successful.

Local authority Planners asked that the pool house kept the form and volume of the derelict diary it replaced. However the new house was allowed to be a lot more expressive, responding to its site and orientation, its proximity to the double Oast House that its Northern roof and three story ‘light canon’ begin to emulate. The form of the roof attempts to reconcile the orientation of the building that faces South East: the roof is lifted up and twisted around to face due South allowing solar PV panels to benefit. It also expresses the main entrance of the dwelling viewed from the East, as well as reflecting the form of the neighbouring Oast House beyond. This undulating form is reflected in the first floor ceilings that also express this functionality. This expressive roof form collects rain water for use on the site, harnesses solar energy and controls natural light allowing it to penetrate the centre of the plan to express the treble height of the stair case, the north light over the living room and perhaps most poetically at different times of the day via the light canon over the meditation room.

The new house was designed to relate to the surrounding landscape in a number of ways while the pool house is broadly North-South facing with its straight- forward solar and sedum roofs. Each elevation of the house is quite different, responding as it does to orientation to the Sun and major views out towards the lake and beyond, as well as to the need for solar gain in the winter and shading from the Sun in the Summer. 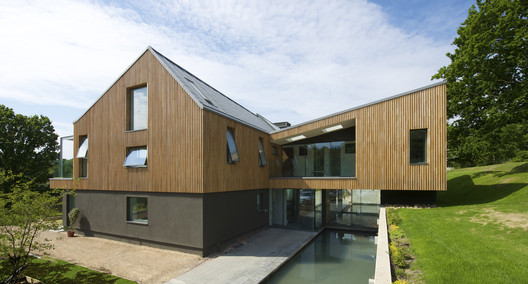