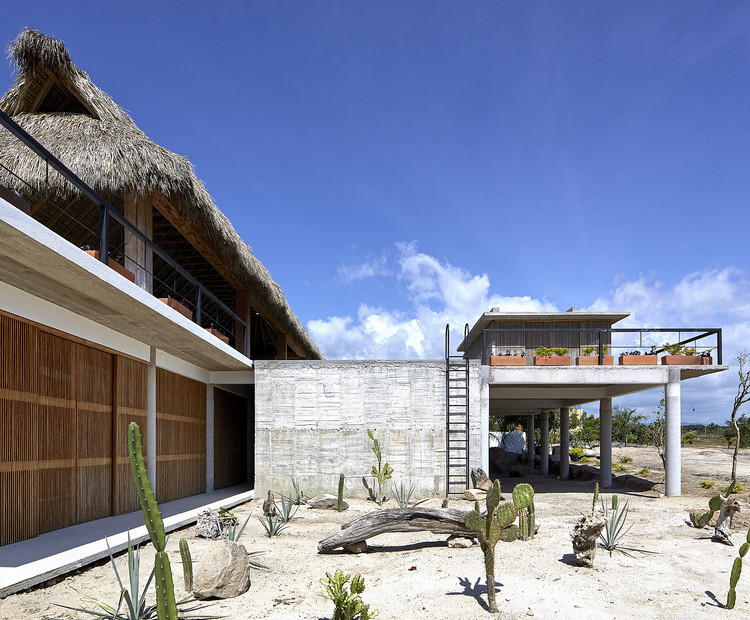 Text description provided by the architects. Casa Cal belongs to a coastal community of 8 houses in a coastal area near Puerto Escondido Oaxaca the mexican surf mecca. Six of these houses have ocean front and two are placed in a second row behind, at the beginning only the six ocean front houses were built and the other two were left in foundations and columns, the reason was that these two houses had the same design as the ocean front houses, so it was necessary a new design that considered the particular issues of this site.

So the owner hired Alfonso Quñones -BAAQ´- to design a whole new project that retook the already built foundations. It represented some challenges, first the view to the ocean in the ground floor was completely blocked by the other houses and in the second floor had partial views between the roofs of the other houses and to the east.

Part of the new design strategy was to allocate the bedrooms and private quarters in the ground floor, and the social area in the second floor. The north and west side was flank by a 5 m white wall with locally handmade latticework parametrically placed to exit the wind flow coming from the sea and passing thru the louver shaped carpentry opposed to the wall, cooling down the rooms.

The wall also gives privacy blocking the view from the common areas and paths of the community to the social area, and enhances the view towards the ocean, this gesture gives the project contrasting types of facades, one totally opened and the other totally closed. The system used for the roof of this area was the traditional Palapa, which is made by artisans with wood and palm leaves which is very fresh and provides shade to the slabs of the rooms beneath.

The pool was shaped as an independent concrete cube inserted in the middle of the house allowing the use from the top floor and dividing in two patios the ground area. Also a small studio was built in the top floor away from the palapa. Considering that the studio was the only element above ground aside from the palapa, it was designed as a cube but made of palm bones (stems) forming louvers,giving a more lite sensation and freshness.

The whole design considers the warm weather that prevails thru the year in the area and takes advantage of the ocean breeze, forming wind flows thru the whole house, inserting gardens for cooling the surrounding soil, and blocking direct sunrays in the closed areas. All these strategies makes possible to have really fresh temperatures inside the house without using air conditioning systems. 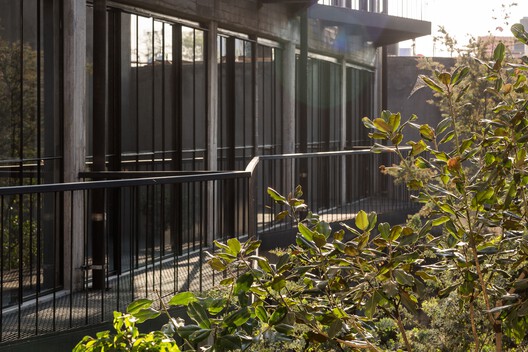