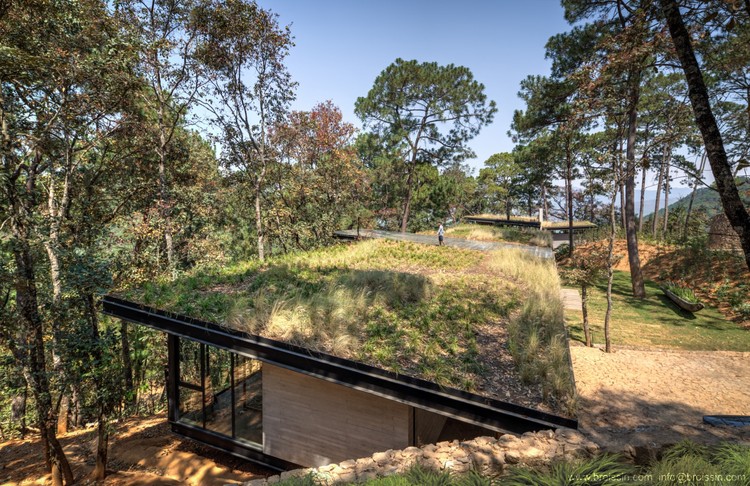 Text description provided by the architects. The name “Avandaro” comes from a Purépecha (a native language) word that means “place of the orchard” or “place in the clouds”. It was a territory originally inhabited by the tarasco indigenous people; who gave it this name, from whose language this house takes its alias, “Irekua”: Family house, and “Anatani”: to be under a tree: Irekua Anatani = Family house under the trees. Inspired by the land, which lies covered by showy trees, principally by oyamel trees, pine trees and encino trees, from the very first visit to the property we thought that the house had to enjoy the splendor of living under this density and be intrinsically a part of it by safeguarding most of the trees and the existing forest. This gave meaning to the architectural concept that took as a foundation platform a tranquil and partly open space in the middle of the mountain. The program was adapted to that topography, adjusting each space according to its use and function within the community of the whole house.

The climate is temperate, semi humid with maximum temperatures of 95 °F and a minimum of 37 °F, which is why the design of the house responds to the orientation. The south east facade shows itself linear and dominated by a wood curtain that helps us to let the sun’s rays through in the morning in a diminished way, giving the necessary warmth to the hallway that is contained between this screen and the concrete wall that is the main support structure of the house, and gives place to interstices amongst public and private spaces conquered by the living rooms and terraces. In visual and formal contrast, the south west facade is mostly glass to capture the sunset in the evening and warm up the bedrooms to prepare them for the temperature decrease at night. The north facade tops towards Valle de Bravo’s lake, it is extended in an open-covered arrangement that reinforces the intention of living in a holistic manner with its environment and users, through the principal terrace and the pool. Meanwhile, the fifth facade is 100% green which maintains a uniform temperature on the ceilings throughout the whole year and camouflages the residence efficiently with its natural context that is the original vein of design.