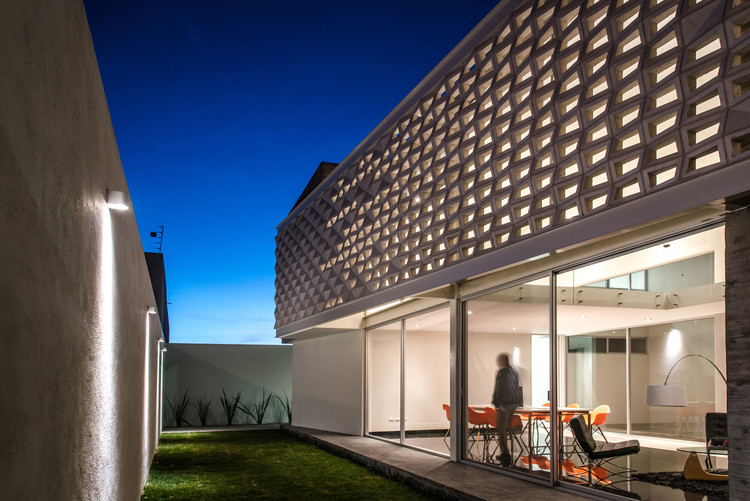 Text description provided by the architects. Is a Project that looks to respond in a synthetic and continent way to the challenges and approaches that have been asked by the users, looking for an economy of material and human resources that allowed to build it in only one phase. It’s located on a 10x30m (300m2) site between sidewalls, nearby houses are also 300m2. The street front looks up to the east doing able to develop a long “H” shaped scheme in the longer axis of the site, having more aperture on common spaces like the living room and the south and west rooms, where Aguascalientes City has the best solar incidence

From the street, the two car garage is covered just by the main room volume, sharing a walk path with its front to side access the house’s main vestibule guided by the corrugated steel plate. The entrance hall is protected by a floating wooden wall that generates the necessary privacy at the houses inside. The spatial continuity to the lower floor, that contains the social and services zone, could be decided from the vestibule having the access to the upper floor by a double height stair nucleus where the private rooms are.

After continuing by the central hallway, just after the massive concrete double height wall, the dining-living space area is discovered having big north and east apertures to maximize its spatial conditions, allowing the familiar garden to the south being articulated with the interior and connected to a contemplation patio in the north. This spatial communication allows cross ventilation and a visual relation between the upper level sunlight shadow play that the lattice wall mezzanine generates and the living area double height, having aperture but protection and privacy sense too. At the end of the lower hall the kitchen opens to a little terrace, having a new exterior scheme, but the rest of the service areas like the pantry and the laundry room hide at the site corner.

The bridge that crosses the upper floor double height serves as an articulation between the living room and the twin bedrooms that share a bathroom, meanwhile at the other extreme the main room is located, having a bigger bathroom and a southeast looking balcony to have control with the exterior and the garden.

The volumetry and materiality of the house looks to have a proper personality answering in a continent and clear way to its relation with the context, with orientations, with an optimized functionality and with a necessary contemporarily understand as the meaning to its execution. The materials unveils themselves making them honest in a combination of in cast concrete, stucco, latticework, wood, metal and glass. 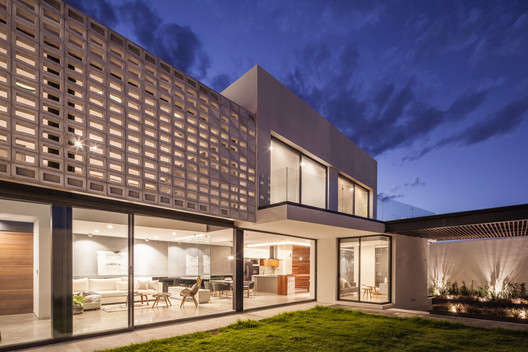 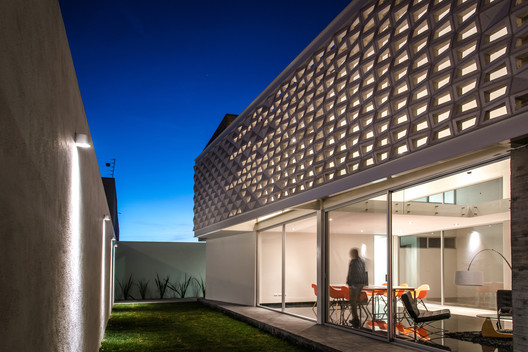