Save
Minus5 Architects & Studio Mr. White Propose "Art Facade" for the Burj Khalifa

The Burj Kahlifa has been the world’s tallest building since 2009, and last year the Dubai-based supertall broke another record by implementing the world's largest LED-illuminated facade. Building on these accomplishments, Minus5 Architects in collaboration with Studio Mr. White, has proposed using LED technology to create scale silhouettes of architectural monuments from around the world on the facade, including the Empire State Building, Beijing's CCTV Tower, London's Shard, Toronto's CN Tower, Taipei 101, the Petronas Towers, and others.

The silhouettes would slowly scroll across the facade to show viewers the heights of other buildings and structures compared to the 828 meter tall (2717 foot tall) tower. According to the designers, "with this visual concept, Burj Khalifa elegantly shows admiration to all construction marvels, while reasserting its position as the ‘big brother’ tallest building in the world.” 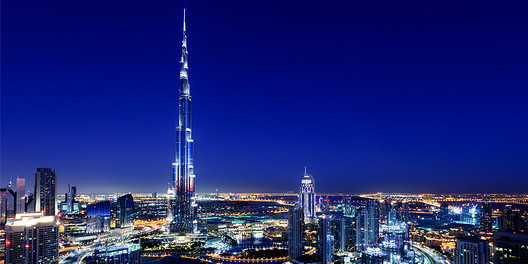