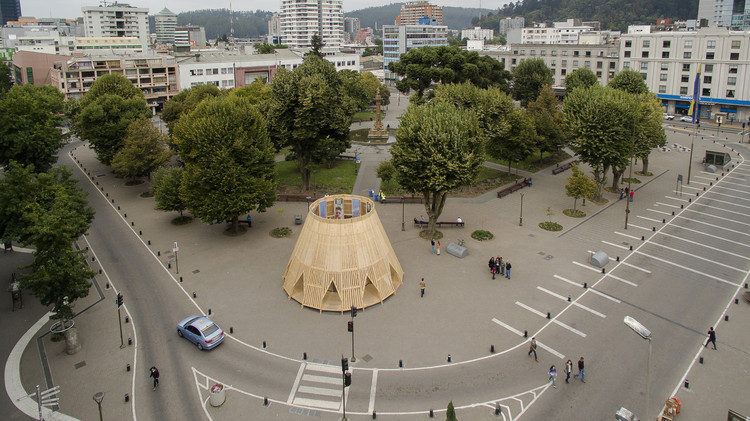 Text description provided by the architects. It is a transportable building made of wood and located on Independence Square in the city of Concepcion, Chile. Commissioned by the development corporation CORFO Chile, it involves creating a pavilion that can accommodate activities and exhibitions related to the productive and creative sector of the city. Taking into account that this is an emerging sector and one of its main problems is the lack of connection between them, we propose a space able to gather, receive and visualize this meeting in a high concurrency urban place. Having completed its period allotted in the public space, the pavilion will be dismounted and transported to the Concepcion Municipal Center of creation and collaborative work C3, for other program activities and use of this space.

To generate visibility through the pavilion, we chose the corner located at the intersection of Caupolicán y Barros Arana streets in the busiest square of Concepcion, a popular place loaded with historic urban objects, the scene of political and religious manifestations, a public space of social contrasts frequented daily by hundreds of people.

A strange object in public space:

A temporary wood building installed in the busiest city center is without a doubt a foreign object for those who pass through there. Thus, the natural reaction of the passerby is to ask about the purpose or reason for such a structure, moreover, there is a spontaneous effort to try to unravel its meaning.

From this perspective, a number of interpretations and spontaneous explanations on what the meaning of this object as a public fact is generated. From the image of an inverted speaker, a space satellite, which refers to the form and turns the construction into an object. Even the naive interpretation of children as they run inside speak of a home to rest and a circle to play with reference to the wood edge that separates the center from the exterior of the pavilion. But it is the most recurring idea, which has drawn our attention: the one that refers to the hut, the vernacular building of the Mapuche people of southern Chile. Most particularly in this partnership is that it is not directly formal, because the hut is constructed with an oval plan, closed on its borders with only two entrances, and a fire inside that expels smoke through two small openings at the top. Thus it obviously contrasts with a pavilion open with 10 entrances, made entirely of wood, and open to the sky in its center.

In our culture, a wood construction generates closeness, moreover, a truss made of timber is a sign of precariousness and self-construction. These elements are the manifestation of intervention with fair resources, which seeks to explain the precise development in synthetic construction processes stripped of ornaments and superfluous and unnecessary elements when materializing a building of this kind. These elements are interpreted as something close, related to the primitive. Those who enter imagine that they could make this with their own hands, with no fancy or foreign technologies. It seems that everything before their eyes is nothing but the reinterpretation of constructive ways that have always been present in our culture.

The construction process of the project consists of the development of a series of precast elements made of smaller pieces. These composite elements are trusses, floors, and wall cladding, as well as a series of individual pieces like diagonals and beams. For the construction of the trusses, floors, and cladding we developed a series of large-scale arrays on which all the prefab elements were serially made. The benefits generated by production based on matrices results in a mechanical process that decreases assembly time and does not require specialized labor for its implementation.

Once the prefab units are built, the pavilion is mounted, the fit of each piece is verified and at the same time, the process of labeling its parts is done so that it can be disassembled and stored for transfer and subsequent installation in its temporary destination located in the center of the city. After approximately 30 days the pavilion returns to the C3 creation center and stays there indefinitely. 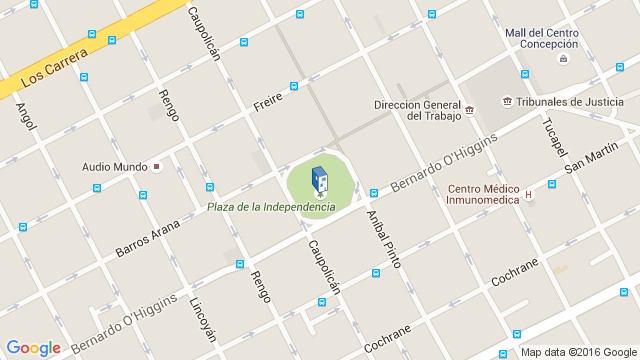