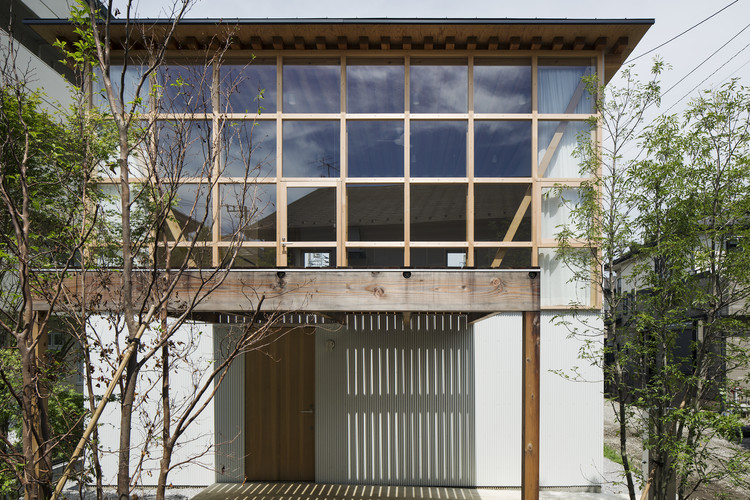 Text description provided by the architects. We designed a house in the suburban area of North Kanto. It is a house for a young couple with two small children. As we designed this house, we realized that there is a common question that we are all (including myself) confronted with when living in a contemporary society.

Family structures, household incomes, working styles, hobbies, tastes, weather and climate are all different for different families. Most of us want to be “special” in some way and have a unique lifestyle. At the same time, we all want to be like everyone else, and be average. These thoughts seem conflicting, but it is actually quite natural to feel this way and is considered to be normal consumer psychology: we all want high quality products, but at a cheap price.

Therefore, “mass-production = prefabrication” has been an inevitable solution, and all housing manufacturers have focused on it. However, just like scholar Hideto Kishida wrote in Kenchiku-zasshi in 1947: “I hope for the development of prefabricated houses, but personally I would’t place an order for a prefabricated house”. Not even the older generation who lived right after the war thought prefabrication was a positive solution.

In this project, our main subject was “a non-mass-produced house made with mass-produced components”, and we reconsidered the way the modern housing should be in terms of the construction method.

It has been about sixty years since we started using the metric system after abolishing the Japanese measuring system. However, Shakkanho, the Japanese measuring system, is still the preferred measuring system in the construction industry, especially when constructing wooden houses. In Japan, based on one Tatami mat (3 shaku x 6 shaku), mass-produced components have been widely distributed among manufacturers and they have been prefabricated through a “conventional method” all around Japan. This has made it possible for anyone to achieve modular coordination, meaning that anyone can become an architect as long as he or she can draw a layout on a grid sheet.

By using the measuring system for our expressions - something which comes so natural for Japanese people - we wanted to obtain not only economic efficiency, but also a modular effect when it come to both design and experience.

In terms of the floor planning, 1 grid has been composed of 3 shaku x 3 shaku (910 x 910mm), and the upper floor of 6 x 8 grids, and the rooms have been assigned according to the grids. Vertically, we have set the height of the upper floor at 4 grid (=2 Tatami mat ) and kept it simple. The rafters in the ceiling are mass-produced, six-meter-long square timbers (120 x 120mm, it is usually used as pillar material ), and we have used them as they are, without cutting them. The excess parts are used as eaves. The measurements of the house is dependent on the mass-produced components, which makes it very cost efficient. In terms of expression, the vividness comes through the  “physical material”. And as for the experience, the structure is based on the modular system we are all accustomed to in Japan, which also assures the nostalgic comfort factor.

Just like Michelangelo et al. used a giant order to escape the classic architectural order during the Renaissance, this is a giant Shakkanho, which replaces the traditional Shakkanho that has supported Japanese architecture. The ideal, normal state of mind that all Japanese people have been looking for has been found in a natural system they all already have access to.