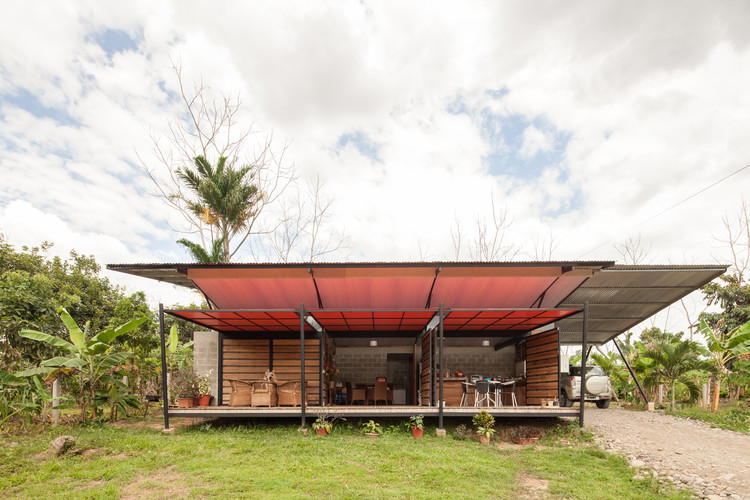 Text description provided by the architects. In our academic context we seem to start by  having to unlearn several notions about our built environment in order to learn how to make architecture.  But when it comes to construction we move between the institutionalized tradition and the "informal" one; the latter represents the majority of what has been built in this country...We must ask then, what significant knowledge pervades the present since it precedes formal architectural education by many years ? How is this knowledge transmitted ? Are the instructions for these constructions drawn or narrated ? Finally, how do we unlearn what we don´t understand ?

The house is located in a hamlet where no other architect has worked before, surrounded by informal constructions such as old traditional houses, milking parlors, warehouses and cattle pens , and the fragile ones that emerge and disappear without a trace like the tents vendors use to sell fruits on the roadside.  The naiveté associated to these constructions is what sets them apart from the architect´s attention and seems to be lost forever in academia, that is why it is difficult to achieve  effects of "poor" architecture such as the light the filters through the crevices in wooden walls, the  dust and smoke particles suspended in the air trapped within its limits, the half-light caused by old wood and the absolute control that shutters provide as opposed to extensive glass and overwhelming light.

As a house of minimal dimensions it will barely incorporate a trajectory inside it, rather, it will be the destination and summary of the necessary journeys for the owner to move to this place,  which involved anticipation and nostalgia until the house became the definitive residence.  Thus it is a collection of the built facts observed during those trips.

The house has simple double faceted roof, it is dimensioned in "varas" (an old unit of measure equivalent to 0.84 meters), has gates of overlapping slats that offer options for light control. Canvases over the deck and concrete slabs outside the bedrooms  make the light bounce twice, get stained and lose heat before coming into the house, this allows for a closer connection with the natural cycles, as the surfaces accentuate the blue light of the morning and the orange light of the afternoon to make waking up and going to bed easier.  Under the same concept, it is possible to see the moon from the master bedroom when it is low in the sky thanks to V shaped polycarbonate ceiling .

For the oversight of the construction personal communication with the builders was indispensable as well as a model that worked better than the drawings.

Mrs. V. (the owner and a tireless cook) needed a house that could be built with her retirement savings (which resulted in $ 400 per sq. m.) and that could accommodate her strong personality and the mementos of her life without worrying about asking for the architect´s opinion to make use of the architecture as she pleases. 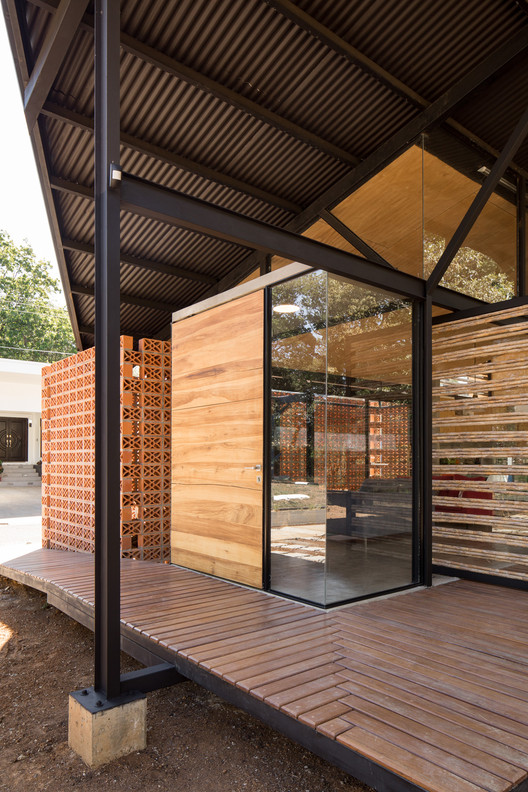