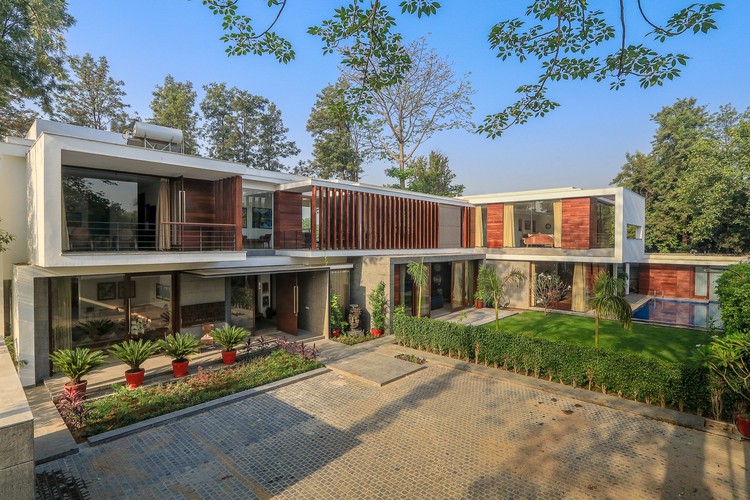 Text description provided by the architects. Set on a quarter-acre, tapering parcel the Gallery House maximises its frontage along the north facing green lawn and arrival court while negotiating the angled rear edge condition. The ground floor layout positions all primary rooms towards the north and west keeping the south primarily service heavy.

The movement between various zones of the house, at both levels, is externalized along this north face and acts as a stretched 'multilevel gallery'. As with the layout, the façade for this house also expresses the gallery like movement

On the ground floor, the formal drawing/dining and the master bedroom become the bookends of this progression, while the family room is centered along it. Secondary bedrooms, kitchen, and service zones are positioned behind this promenade. On the upper floor this north facing connector assumes an airy and unencumbered character given the reduction in the programmatic dependencies. For a large part, the modulation of the upper floors' layout emerges from a study in framing and sequencing of the visual progression as one moves between the upper master bedroom and guest bedroom towards the north-east quadrant . The position of the linear staircase is a part of this choreographed journey which now assumes a vertical dimension to it. While the staircase begins at the deeper end of the large living room; as one moves upwards they are maneuvered towards the northern threshold or skin of the house. This creates a dramatic change in the experiential quality of the interior space.

The upper level facade is conceived as a transparent linear volume; contained between series of masonry envelopes or folds. Use of seasoned hardwood battens helps screen the glazed upper corridor and also seems to weave together the long slab folds that define the upper level volume. This white stucco and timber clad composition is deliberately contrasted with the heavier visual tectonics of the ground floor that is primarily clad in sand-blasted and flamed granite slabs.  Three partially enclosed north facing terraces punctuate the upper facade. Two of these modest sized terraces have cut-outs in the slab above which frames the sky and tree tops and also the shifting shaft of sunlight.

The landscape design palette echo's the materials used on the facade. The paving and pool side decking is clad in rough steel-grey granite while the junctions between the paving and walls are separated by a continuous strip of black gravel. The driveway design is executed with the use of grey quartzite cobblestones and is deliberately kept understated. 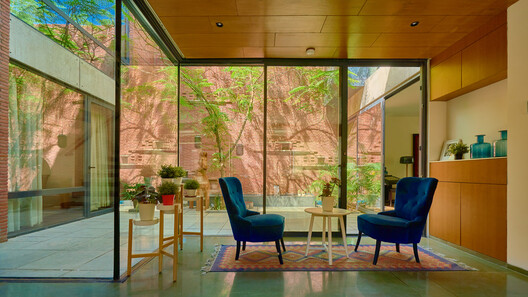