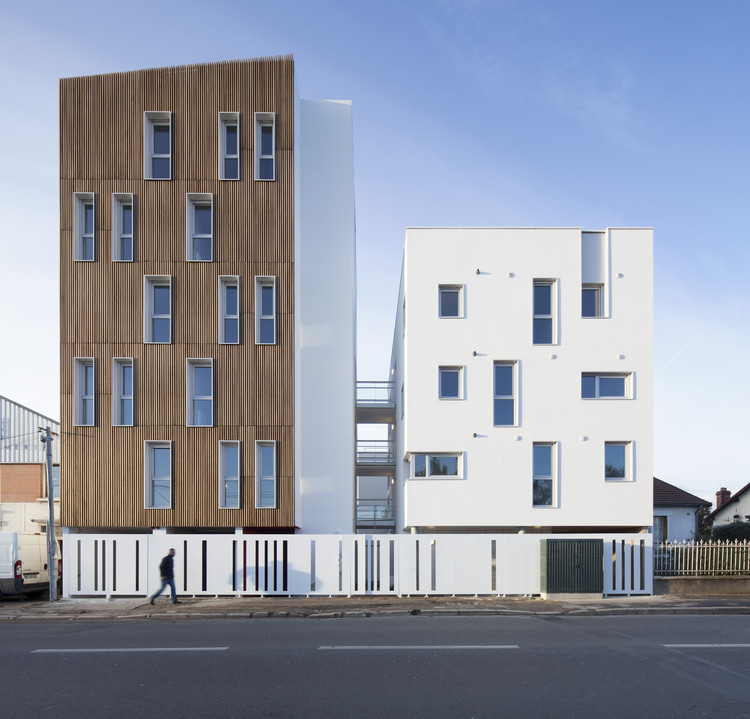 Text description provided by the architects. For this project of sixteen social housing units, the Atelier Gemaile RECHAK offers intuitive thresholds which address all levels of perception as well as the urban, intimate and landscape levels of the site. Exploration.

The first threshold is the confrontation between a violent and noisy main road and a project which fulfils its urban function.

The establishment of the construction and the dimensions of the two facades visible from the road maintain the link between a network of small houses and (closer to the town centre) buildings of up to five storeys. The variations of full and empty are thus reminiscent of the universe of a house and garden, all the while connecting the different urban scales of the site, from individual to collective dwelling.

The assembly of this construction is part of the transformation of this urban network. As such, in opposition to the current austerity of the street, the wooden façade invites you warmly to come home, the woven effect of the faille material evoking an interior space just for the inhabitants. This is an affirmation of both the urbanity and the contemporaneity of the project, while also suggesting a protected space for the inhabitants, away from the street.

The gradual increase in level is expressed by a semi-private AND common area of free movement which continues the route between street and home. It is only when you have stepped through the doorway (the only entrance of the building) that this bright open-air path - neither a passageway nor a corridor –suddenly opens up several possible routes and just as many destinations.

In fact, this is not a building of sixteen housing units but rather sixteen units nestled in four small groups, each different, and each with its own identity and amenities. Unlike a regimented and overpowering building, these units look less like a block of flats and more like a project which is in-between social housing and private lodgement. The wide passageways and the common areas invite movement, reinforcing the intimate notion of arriving home. It is also significant that all the passageways have natural light, further emphasizing the aspect of perception on the route between the street and the apartment.

At the centre of the block of buildings there is a further example of how space is handled. The project block plan reveals an urban profile of surprising diversity, ranging from five storeys to ground floor, from the street up to the back of the plot, and conversely. The units are all organized around a garden with a uniform layout while an awning located close to the vine of the adjoining plot opens towards a large landscape horizon. The inhabitants, with the urban hubbub at their back, have a near view of a calm and serene garden and far view of the wide landscape of the Montmorency valley.

Although the density was of course imposed by the programme, the project composition lines allowed for the conception of a great variety of housing units – there are, for example, two duplexes, some apartments with terraces at garden level, etc. Although this was not a regulatory requirement, all the units can be accessed by mobility impaired persons, and the wide passageways provide easy access to these homes. These homes are all south-west facing with a view of the garden and, for most of them, of the wide landscape.

This specific interiority helps the inhabitant to feel that the place belongs to him or her. In effect, if the passageways invite one to “go somewhere”, this sense of home offers the feeling of “being somewhere”. This is possibly the best example of the architect’s intention.

The wood cladding illustrates perfectly both the multiplicity of the diverse elements of the project and its overall uniqueness. In effect, it appears like a continuous crease, its horizontality leading to the horizontality of the garden and of the terrace before elegantly covering the car-park ramp. It then becomes vertical on the façade and finally turns around on the roof and reappears on the street-facing façade.

This feature thus becomes the element which constitutes a space which reinforces the intimacy of the unit while also opening it up to the exterior. Its very path from the far landscape, to the garden, to the public space of the street symbolizes the reassuring attention and specialist expertise applied to all the aspects of this site and of this subtle project. 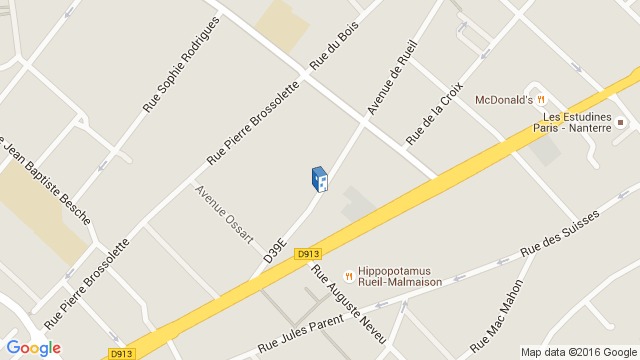 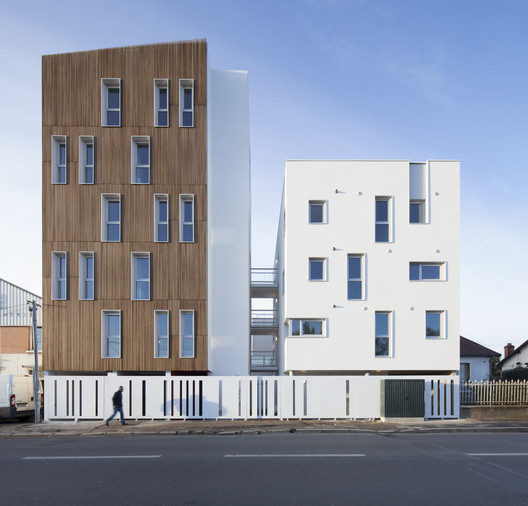