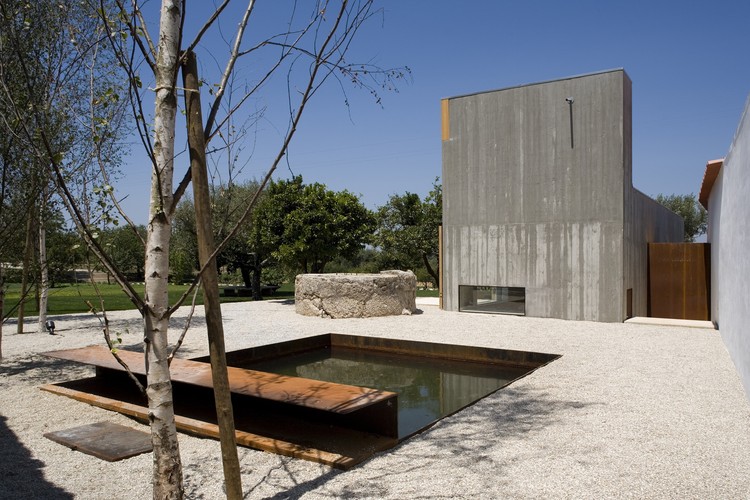 Text description provided by the architects. The project for the House in Chamusca da Beira consists in the requalification of a small built aggregate in a rural estate and on its enlargement with the construction from scratch of a new small building, directly articulated with the exterior space. The former woodshed of the main house was redesigned to function as an entrance space (from where you can enter the new building) and to receive an autonomous wooden structure that encloses a toilet. In this space the traditional constructive systems were kept, like the monopitched roof laid on a traditional wooden structure, that is extended to function as a porch over a small courtyard. The demolition of a set of unqualified outbuildings (storage rooms and garage), which were lean to the wall that limits the courtyard, allowed to enhance its presence and to recover the original building character. This wall is crossed by a tunnel made of corten steel, that establishes the transition between the new room and the former woodshed.

The new construction was designed in a very close way to the preexisting constructions (the main house and the adjacent courtyard) but also with the natural landscape, with special attention payed to the proximity of a well and a set of orange trees. The new telluric volume – narrow, vertical and also with a mono-pitched roof – opens the house over the landscape, clearly communicating with it through the three big windows opened towards southwest. Unlike the rehabilitated spaces, where the materiality is recovered from the original, here the material options were made towards an affirmation of contemporaneity, with the use of concrete in the exterior walls and zinc in the roof.