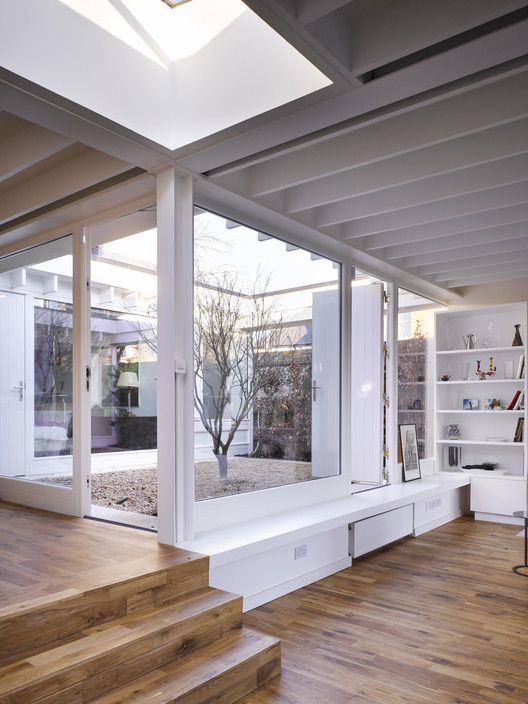 Text description provided by the architects. A new singular roof plane floats over part of the rear of the site to create a sunken garden room enclosing a calm courtyard, proportioned on a golden section ratio. A rooflight over steps to the new room – similarly proportioned – generates a diagonal conversation between open and closed spaces. Dissolving boundaries between inside and outside, integrating living rooms with garden spaces by creating an undulating ground plane under a floating roof, it reinforces the idea of the traditional Dublin type, the single storey villa with its ingenious split section. By sinking the garden room and terrace below the hidden courtyard between old and new, then stepping the garden to its original level, volume and spaciousness as well as privacy and intimacy are created.

Client Comment
The architects created a beautiful series of light-filled interconnecting spaces for us, which capture the best aspects of this corner site. Everywhere views of nature are captured through large windows: to a courtyard, to a terraced green rear garden and a beech filled front garden. The Victorian house was carefully integrated with the new kitchen and living elements to knit the house into a harmonious whole: the sequence of spaces– old and new - feel expansive because of the way they open into each other, always with views through to a space beyond. The architects’ vision has created a light filled house out of the dark enclosed rooms we started with.