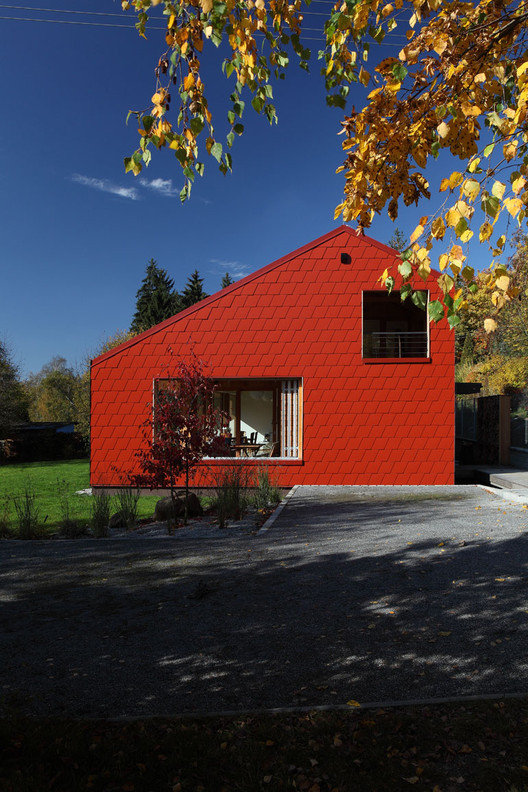 Text description provided by the architects. This home was originally designed as a single-level house for a mature couple wishing to move out of the bustling city center. We ended up designing the home as a reaction to local regulations that dictated the shape and color of the roof. The second story continues all the way to the covered veranda, which, like the main living space, has two floors.

The final project differs very little from the initial idea and sketches. The basic concept is that of "a house within a house." Only about two-thirds of the total area of the house is heated living space. This wooden building is enclosed by an outer structure (regulation brick red) featuring interspaces and covered verandas. The overhang of the roof keeps the sun out, especially on the southern glass façade so that window coverings are not needed.

The internal layout of the building is traditional yet logical in its aspect. On the southern side natural sunlight warms the living areas. The cooler section of the building on the north wall houses more the utilitarian rooms. The main living space is divided into two levels joined by a conventional staircase. The master bedroom, guest room, and another room that might serve as a workshop are also on the ground floor. In the attic “galleria” there is a second level of living space and the entrance to the second level of the covered veranda. The interior of the covered veranda is lined with larch paneling.

On the ground floor one can enter both verandas. The veranda on the south wall is narrow. The covered main veranda features a built-in larch bench and a large exterior window fitted with a white shutter for maximum privacy.

It is advantageous that the plot of land was once the garden to an old recreational building. We were able to erect the new house into an established environment, which the landscape architects soon made into a very pleasant garden space.

The aspect of the lot is ideal, with an access road from the north. We situated the approach to the land in the northeast corner.