“The Chicago Skyline could do for Chicago what the London Eye has done for London, and become a very identifiable landmark within the city, driving tourism and prosperity,” says David Marks, Director at Marks Barfield Architects. “Its design touches the ground lightly and with an environmentally sensitive and delicate presence - like jewels in a necklace - energizing the city's Riverwalk, and attracting the eyes of the world.”

The “Chicago Skyline” Project is being developed with Lou Raizin, a noted figure in the Chicago entertainment industry and former Chair of the Chicago Loop Alliance, and Laurence S. Geller, current Chairman of Geller Investment Co and an accomplished leader in the hospitality industry. If built, the Skyline would operate into the evening hours and year-round. The project team includes Leitner-Poma, builder of the London Eye capsules, and Jacobs, that project’s principal engineers.

Click the clip below for a video rendering of the project. 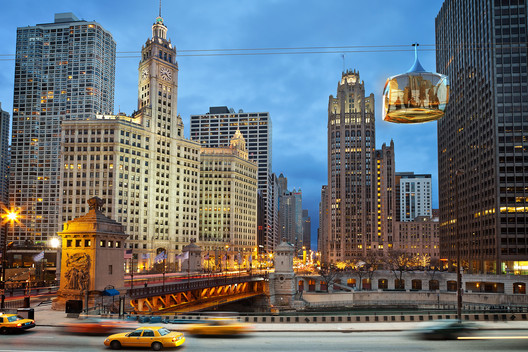