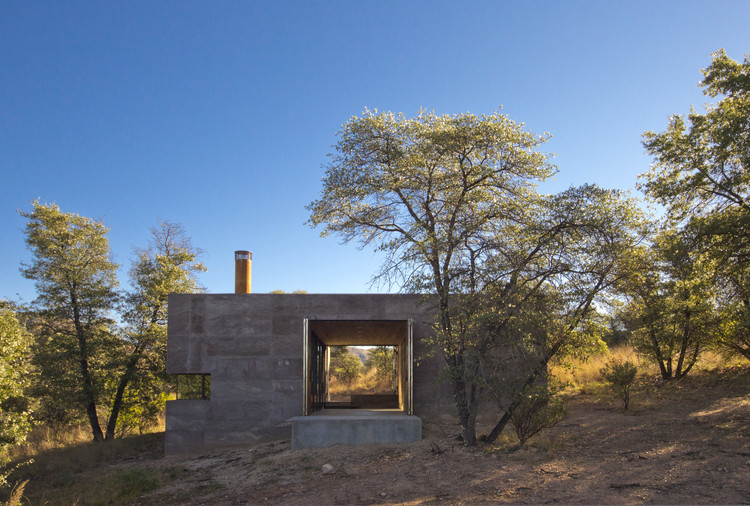 Text description provided by the architects. The story of this place is rooted deep in the history and culture of the region.

The biodiversity of the region is part of the larger Madrean Archipelago, which stretches from the Sonoran to Chihuahuan deserts, to parts of Southern Arizona, Southern New Mexico, and parts of Far West Texas. The sky island ranges serve as beacons for life and inhabitants in the vast desert landscape. They are links in a chain that connect the northern end of the Sierra Madres in Mexico, and are essential in the story of life in the region; in form of refuge and resource base for migrating tribes, birds, and predators moving through the vast openness.

The San Rafael Valley’s topography and geology form the headwaters of the Santa Cruz River, one of the only rivers that runs south into Mexico, and turns back north into the U.S. This river is vital to the story of the habitation of this region for the past 10,000 years.

Much of the human history lends itself to the geological events of the region millions of years ago.  Large volcanic activity formed the landscape as we know it now. This left behind the basin and range topography, as well as mineral and resource rich land that has been of value and use to the cultures that inhabited the region.

From native agricultural cultures, to nomadic hunter-gatherers, to conquistadors and missionaries, to pioneers, miners, cattle, and cowboys, to militia, migrants, and narcotraficantes, it is the landscape and folklore of the quintessential Wild West.

It is this history and context that Casa Caldera grows from. This small shelter is strongly informed by the climatic conditions; adapting to the natural, social, political, and economical environments, each to its own weighted and varying degree.

The structure is a 945 square foot shelter located on the southwestern bajada of the Canelo Hills in Southern Arizona’s San Rafael Valley, a high desert two hours southeast of Tucson and 15 miles north of the international border between the U.S. and Mexico. It sits just under 5000 feet above sea level, nestled amongst emory oaks and manzanitas. The structure emerges from the native grasses that define the hillside and open ranges beyond. The siting of the house was a negotiation to find a balance between the prospect of the open range and mountains, and the refuge from hunters, discoverers and potential migrants. You are not aware of the structure until you are upon it.

To emphasize this refuge quality, the material of the structure was chosen to blend in with the environment, and the program made to close down. The mass walls are constructed of poured lava crete, a process and product refined by the material’s pioneer, Paul Schwam, and used in the region’s architectural community, notably by Paul Weiner and Design Build Collaborative. It is seen by locals as a new vernacular material, comprised of a mixture of red scoria, a pulverized lava rock, cement, and water that forms a self-supporting semi-fluid material which is rammed into formwork similar to rammed earth. The resulting effect was a subtle contrast to the grasses around, changing subtly to the qualities of light through the year, blends harmoniously with the landscape appearing as if it belonged there with the grass, oaks, manzanitas and rocks.

The clients request of having outdoor living and sleeping zones lead to the re-discovery of a local vernacular house planning typology that was used as the main organizing concept of Casa Caldera – a Zaguan.

Large bifolding metal doors on either end of the Zaguan connect the covered living space to the landscape beyond. To the east the Zaguan opens up like a full scale diorama and to the west the story book view stretches to the distant landscape across San Rafael Valley and the Patagonia Mountains.

The bi-folding doors deliver natural light and harness passive cooling breezes when open and security when closed. The doors can be configured in a myriad of ways, as seasons, use, and lifestyle requires the owner to interact and respond, using the bi-folding doors to control the solar gain or harness the breezes in different ways. When the temperatures are appropriate the Zaguan is a protected covered space used for lounging, dining and sleeping.

The Zaguan as a space offers the rare experience where one can slow down or stop altogether, and simply take in the natural environment in a single focused view and physically witness time passing.

The only sources of heat are a wood burning stove and fireplace.  Experientially, in the winter, the first thing one thinks of when they wake is fire.  The smell of the Arizona Emory oaks burning further distinguishes the experiential nature of the house in the memory of scent.

Cooling is achieved through the thermal offset of 18” thick scoria walls and the natural flow of air that moves through the Zaguan due to the positive and negative pressures on either side. Solar orientation was carefully considered in the placement of exterior windows, which were kept small to minimize direct solar heat gain in the summer.

All of the windows are operable, as well as the kicks and transoms of the living room window wall, bedroom entry and slot windows that harness and pull air out of the Zaguan and through the living and sleeping zones. An extra door was added to the access to the sleeping zone, so that when both are open, the small wood burning stove can also heat the Zaguan space for dinner parties and small gatherings when desired. This operability further engages the owner as an active participant in the experience of the house.

An existing well provides water for the house, and a small solar electrical system sits away from the house to provide for basic electrical power use. Minimal lighting is used, all low voltage LED. Cooking, water heating and refrigeration are all powered by propane gas.

Casa Caldera is almost entirely custom built. The scoria walls, steel windows, doors, hardware, leather pulls, wood siding, millwork, casework and framing were all fabricated and installed by DUST. The wood that is used on the ceiling and Zaguan walls is reclaimed sassafrass. Casa Caldera is entirely off grid.

Only thirty yards of waste, one roll-off, was created in the making of Casa Caldera.