"I always liked play as a form of learning; toys are often a prelude to serious ideas," says Federico Babina about his latest series of illustrations, titled ARCHICARDS. "The game can also be a thought experiment. I'm interested in playing with architecture's seriousness and illustration's lightheartedness."

Babina's illustrations turn 12 of the architecture world's most recognizable faces into card-game caricatures, accompanied by the designs and symbols that most characterize their design style. Whether it's the dislocated planes of Mies van der Rohe (a Jack), Queen Zaha Hadid's jagged curves, or the modulor man that accompanies Le Corbusier - who is, of course, a king - Babina's playing cards are loaded with design references. They might indeed have some educational value, but they are mostly, as Babina points out, for "serious fun."

Read on to see the full set of 12 illustrations. 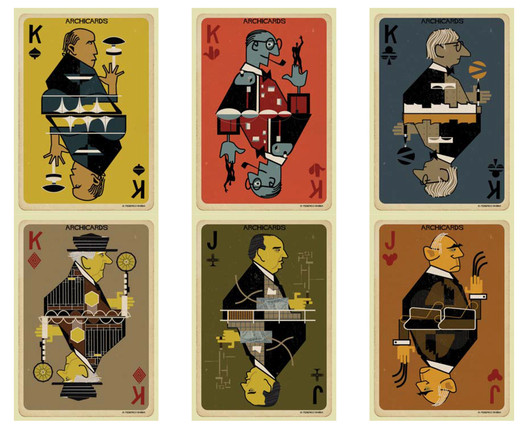