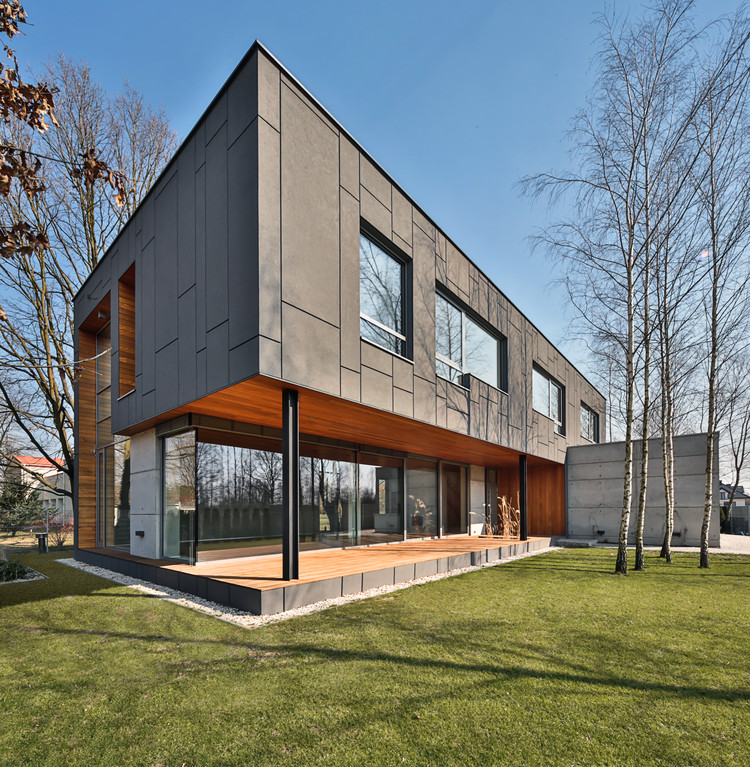 Text description provided by the architects. The first condition which dictated the structure’s shape was the desire to erect a building of considerable size on a relatively small piece of land (with an area of about 900 sqm).

As a result, the house was built in an L-shape and situated in the corner of the plot.

Though very complex ideas were incorporated into the building’s design, its final form is relatively simple.

In the initial design phase, the building was to be crowned with an asymmetric, gabled roof. Yet the necessity of creating an additional space while preserving the original layout of the ground floor forced a revision of the initial concept. Besides the functional program, the investor’s only guidelines concerned custom floor heights (3.85 m for the ground floor and 3 m for the first floor). Other than that, we had complete freedom in our decision making.

We strove to create a building that expressed itself simply, with clear divisions of materials and colors. In creating its façade, we decided to make use of concrete, plaster and African wood.

The combination of the raw, loft-style concrete form of the garage with the graphite form of the living quarters gave rise to a contrasting composition. Its most striking feature is the way the smooth surface of the living area is cut by an irregular orthogonal grid of rustication. We sought to balance the coolness of the main materials used in the façade with knotless African okoume wood. This wood lent clarity to the façade and visually insulated the building.

We moderated the building’s monumentality with a large number of windows, which gave lightness to the structure and provided good illumination to its interior. During the creative process, we applied the principle of special subtraction rather than addition or ornamentation. We wanted to convey the impression of a cold cuboid with an interior made of wood, so we consistently covered surfaces created by "removing" fragments of the structure with okoume timbering. This visual cut gave rise to the terraces occupying part of the ground and first floors. This move allowed us to maintain the cubic shape of the main structure and simultaneously maximize the surface area available for greenery. Taken as a whole, the house was to be a platform floating in a sea of green, one the residents would not want to leave.

The minimalist interiors match the aesthetics of the elevation – contrasting colors, white and graphite, and concrete, wood and glass are used here to create the atmosphere. The large area devoted to windows allows the presence of greenery from the yard to be felt inside.

The house was designed in accordance with the principles of efficient energy construction. By facing the windows to the southwest and keeping the structure relatively closed off from the north, we reduced the amount of energy needed to heat the house. The building is equipped with mechanical ventilation heat recovery, a ground heat exchanger and a wall air intake grill. The thermal insulation used exceeds the standards required in Poland. 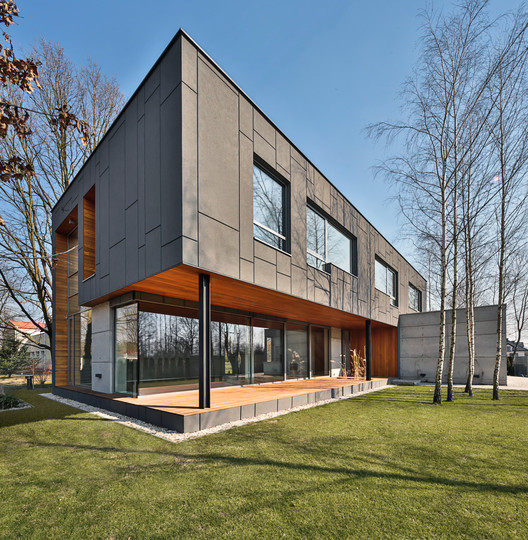