Twelve years after Santiago Calatrava revealed his design for the World Trade Center Oculus, the PATH station finally opened to the public in March. Although not officially confirmed by the Port Authority, the total cost of the Oculus is estimated to be nearly four billion dollars - almost double the original budget. The Real Deal has broken down the big-ticket costs that went into the making of the Oculus.

The design of the structure, building underneath the subway line, and Hurricane Sandy, among other reasons, all contributed to the extreme increase in the budget. The overall architectural design cost alone totaled roughly 405 million dollars, the skylight, which will open once a year on September 11, cost 32 million dollars, and the construction costs swallowed almost one billion dollars.

Read more about the big-ticket fees of the decade long construction, here.

News via The Real Deal 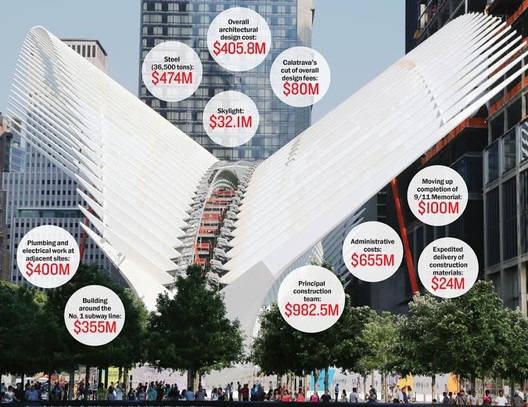