Save
House U / Atelier KUKKA Architects 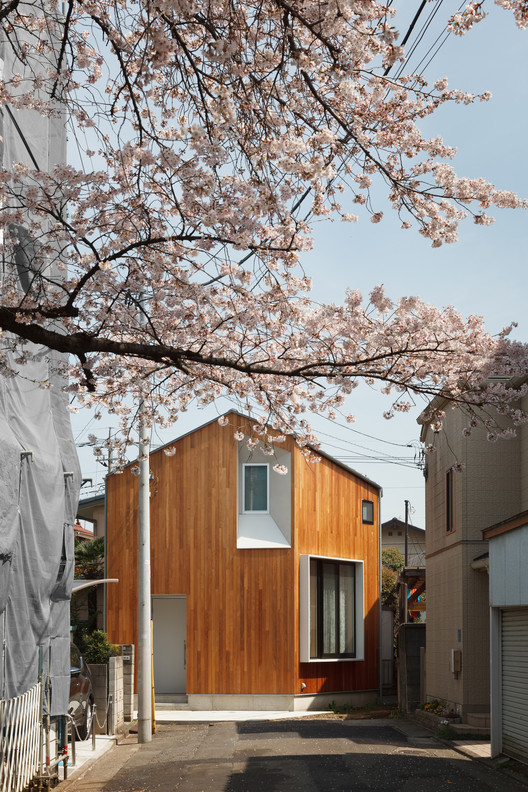 Text description provided by the architects. This is a small house with red cedar outer walls, for a couple, located in Tokyo, Japan. It was built to the end of a street (extending 150m over 3blocks) with aｎ impressive cherry tree, in a quiet residential area slightly away from the city center.

The site was a small one in the dense residential areas. It surrounded by houses on three sides, with loopholes of light and wind coming from  diagonal directions.

Owner requested an impressive form of the house, like an objet heading to the street. They also wanted to feel a presence of the cherry tree while in the room, but didn’t need a large window capable of peeking from the outside.

For that requests and a purpose of introducing light and wind, based on a rectangular arrangement, I made a design that cut a southwest corner of the house, arranging a garden. and designed two windows ; a dent window and a bay window.

The small dent window of the work room (2nd floor) faces the cherry tree and the street. In Japanese summer, afternoon sun raises the temperature of rooms highly. So the small window has a function not only avoiding peeking but also keeping the room cool. Converging walls toward the window have an effect to show the window larger than the actual, so contribute to the general impression of the house as like an objet.

The big bay window on a southwest diagonal  wall,  has a function to enter the sunlight from the south without reducing interior space, at the same time avoids to seen directly from the street. In the future, we can expect a blindfold by trees in the garden visible through the window.

I wanted to create a woody warm impression of the house where the indoor light spilling from windows. As a result, the house shows an impressive facade consists of two elevations, each has a contrasting window. It looks like a woody objet.

To avoid the flat ceiling space of the ground floor, I designed different ceiling heights by putting a step at the second floor. A small rise at the second floor can be used as a chair and put the floor an accent. On the other hands I planned a dining kitchen with a void it took light from 2nd floor terrace at southeast corner.

I arranged a space with no partition spirally around the dark blue accent wall (serving as a construction wall); a living room with a bay window, a dining kitchen with a void, a Japanese-style room (bed room), and a work room on the small rise. They make various whereabouts and constitute the space of gradual upward spiral form. By the void and the step, I made the space feel wider than the actual area.