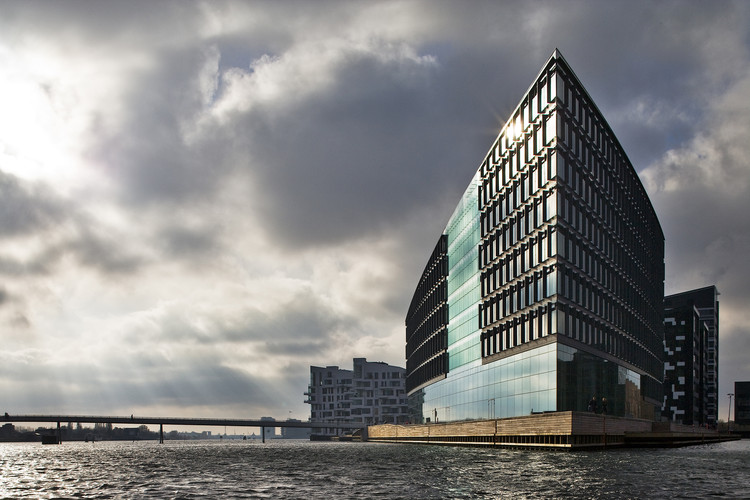 Text description provided by the architects. The multimedia building on Havneholmen is tailored from outside to in to fit the island location and its users - CAE and Aller Media. With its gently curved triangular form, the building delineates the point of ‘Havneholmen’ that projects out into Copenhagen harbor, and is surrounded by water on both sides. CAE and Aller Media, which previously had their main address in Valby - another part of Copenhagen, chose to consolidate their many activities and publications in the new multimedia headquarters to create an efficient and diverse work environment. The building itself has created value for Aller Media's brand and marketing activities, and the atrium is often used for external functions and events. The building has been meticulously designed from the overall architectural lines down to the detailed interior design and it was awarded by the Copenhagen Municipality in 2009. The award committee called the building a "gesamtkunstverk" (work of art).

“The project makes a statement that is very difficult to ignore. Like the cutting edge of a knife, the building’s dramatic presence on the corner has an artistic power that is exceedingly convincing.

The atmosphere within offices and work areas is soft, inviting and warm – very compelling and of extremely high quality. The building exudes Scandi­navian sensuality. It is situated perfectly with all visual lines coming together in the ground plan.

It stands apart as one the most exciting buildings in the area.”

A large atrium extends right through the center of the building like a ravine with soft edges. It pulls daylight so far into the building that on bright days there is no need for artificial lighting during daytime. The floor slabs withdraw further and further back as you move up the building, creating a bright, terraced room that opens towards the harbor and the heavens. The colors and materials are inspired by the Nordic land­scape; the fells, the forest, the sea, the moor in the changing of seasons. Materials and surfaces are restrained in sober colours that submit to the predominant visual lines and establish a calm framework for daily life in the editorial groups. The tones alternate between the cool, the mild and warm. The undulating balustrades towards the atrium are lined with oak slats in a warm glow, highlighted by soft, diffuse lighting. The stairs and walkways across the atrium have a cool and airy expression of green and white hues in the glass surfaces.

Aller headquarters is designed for Aller Media's users from an activity-based and relatively open interior design concept that corresponds to the organizations working methods. At the same time, the building’s interior is so flexible that the layout can change in response to Aller’s dynamic development - both as an organization and media producer. The comprehensive, interactive user process which PLH conducted as part of workplace design program has provided the foundation for the building’s differentiated interior design, with varied types of workspace that meet the needs of individual editorial groups.

A competition was held for the commissioning of a work of art that could be placed in the central atrium. It was won by the Swedish artists, Bigert & Bergström with “Tomorrows Weather ". The artwork is an installation of lights that simulate atmospheric molecules and change color in accordance with the next day’s weather forecast, relayed directly from DMI (The Danish Bureau of Meteorology). The spiral-shaped installation stretches over several floors where the large, glazed atrium façade faces the water. Here it is visible from inside and outside, so that from Island Brygge on the island of Amager and from Bryggebroen (a bicycle and pedestrian bridge connecting Havneholmen and the island of Amager) one can experience the weather and Aller building’s changing color scale. 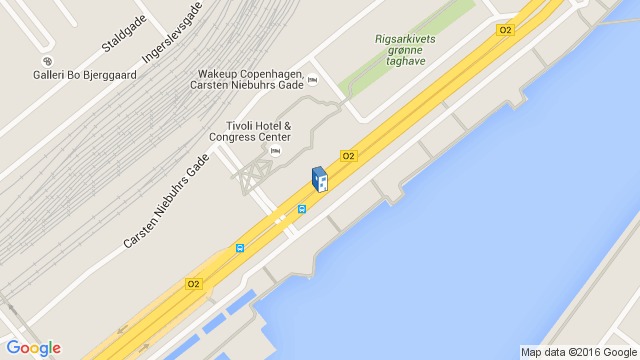 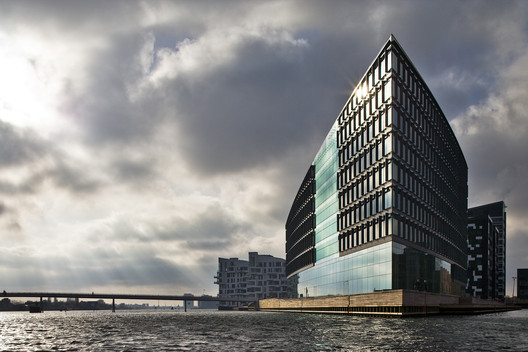