Vladimir Gintoff: What historical precedents are there for destroying and rebuilding a site of conflict such as this?

Stefan Simon: There have been many, which come to mind, Warsaw, Dresden, the old bridge (Stari Most) in Mostar, destroyed during the Bosnian war and rebuilt (a lighthouse project, finished while many mosques, churches and monasteries are still laying in rubble until today in Bosnia!). Unfortunately, mankind has an extensive record in destruction and rebuilding. Also after other types of disaster, for example Sungnyemun, National Treasure No.1, the great south gate of the wall city of old Seoul from the Joseon Dynasty, that was destroyed in a fire on February 10th, 2008, and subsequently rebuilt, and also, in a very impressive way, the world heritage sites (Shrine of Alpha Moya in Timbuktu, etc.). Not forgetting the ongoing discussion on the Bamiyan Buddhas in Afghanistan.

VG: The restoration of architecture can often be a tenuous discipline, balancing a desire to preserve history against the irrevocability of change. Are you in favor of using only original materials in restorations or a hybrid of old and new that revives formal characteristics but acknowledges past conflicts and traumas?

SS: You use a very good word, “balance." The idea of using only “original” materials sounds convincing, but in most cases is simply not workable, and it can also be debatable what “original” materials actually means in the context of historic preservation: does it refer just to the materials, or to the building techniques and so on?

The idea to acknowledge past conflict without romanticizing is also a quite recent one. We have to realize that conservation ethics develop not in a linear way, but rather in waves. We have seen aesthetic, puristic, scientific, historic and other waves, also strongly depending on the cultural context.

In cultures based more on wood than on stone as a fundamental construction material, like in Japan or parts of China, the concept of the original is different than in the Western hemisphere. We have to be aware of this. In general, I think it is not a bad idea to listen first to those who are the closest stakeholders. Here, that's our colleagues in Syria who are actually defending cultural heritage on the ground, they are true monuments men, and more than a dozen of them have paid with their lives. Then, look at the charters, and of course mobilize international support. We are in here on a long haul, that should be clear.

VG: Great works of architecture are demolished all the time, usually to accommodate the neoliberal free market economy. Why is it that the harm of ancient sites strikes so much stronger of a cord?

SS: An excellent question. The biggest threat to cultural heritage still is agricultural and urban development, not disaster. Not that these losses go unnoticed in the professional community.

As for the world heritage sites in Africa and the Middle East, the striking of the cord seems to work in both ways, for those who commit these horrible war crimes of destruction, whether in Syria, Mali, Nigeria, or elsewhere, and those who helplessly watch from a more global perspective. Actually, I think we cannot discuss Palmyra without thinking about Aleppo, Homs and the other cities, where the people of Syria are suffering over these long years of conflict. It seems to me very important to make the discussion on conservation and reconstruction a place for civic engagement, show that it is relevant for everybody. If we were to concentrate only on the case of Palmyra, I think we would fail on a critical step, and lose at a critical point, the sustainability.

VG: Do you see rebuilding as an opportunity to add architectural meaning to Palmyra or simply to reproduce it as it existed? Essentially, I’m wondering how you view projects like David Chipperfield’s work on the Neues Museum in Berlin, Peter Zumthor’s Kolumba Museum in Cologne, or Carlos Quevedo Rojas’ restoration of Matrera Castle in Cádiz, Spain?

SS: I think this will be a long process. Honestly, if in 2, 3 years, there is a concrete plan how to move things forward in Palmyra, that would be a huge success for the Syrians and the international conservation community. It will also require huge international support, for sure, but then it can have an important role of reconciliation for the people. I am not sure about the concept of adding architectural meaning. The New Museum in Berlin for example, it certainly is a great example of how to respect and deal with traces of historic change in a modern museum setting - but it is not a standard, it is also just a product of its specific time, and by no means the best or the ultimate approach to dealing with such situations forever.

VG: If you were to advocate for a complete restoration of the site, do you think there should also be elements that acknowledge the city’s occupation by ISIS?

SS: There is no way, not even theoretical, I think, which can erase the traces which the ISIS occupation left on the site of Palmyra. These have been so massive, and there are also other damages caused by other conflict parties. And not forgetting the looting which is ongoing on an industrial scale in Syria and other countries, not only in ISIS controlled regions. When we talk about restoration, and whatever you may refer to as complete, I want to hear the voices of our Syrian colleagues first, the voices of ICOMOS, in which almost 10,000 international professionals of conservation are united, UNESCO, ICCROM and others. I think this can provide quite a consensual platform to identify the priorities.

VG: Do you think this process in Palmyra will be mired by the same bureaucracy that has plagued the Buddhas of Bamiyan since their destruction in 2001? There the ethics over original or new materials questions the site’s status as a UNESCO World Heritage site, and certain proposals to resurrect only one of the figures – a gesture of coming to terms with past violence – violates the unbreakable bond of the two buddhas (Shamana and Salsal).

SS: Of course I expect more heated debates about the “good” approach. We are already witnessing these, around the recent demonstration on Trafalgar Square in London. This may be more interesting in terms of process than of product. We cannot just simply 3D scan and reprint history.

I remember that shortly after the devastating earthquake in Bam in December 2003, with many fatalities in the city, an impressive majority of the inhabitants were expressing their wish to prioritize conserving and rebuilding the Arg-é Bam and the city (which later in 2004 became World Heritage). This might have come as a surprise if you saw the people living in tents, without water and basic supplies, but it provided impressive evidence for what cultural heritage really means for the people.

VG: Who do you see as being responsible for the restoration work? And would you expect it to begin in the immediate future? In other words, I’m curious if think that these efforts can get underway while the region remains in a state of turmoil?

SS: The Syrian DGAM has been and is working on various protection and conservation projects over the past years, in very difficult circumstances, as we all can imagine. The international community is expected to support and accompany these processes, and we have to be generous, creative and innovative in our support!

In accordance with international charters, it will be on the Syrian colleagues to take the lead. Let me remind you what happened in Timbuktu: The reconstruction efforts were a matter of human dignity and respect for identity, above all. The UNESCO Director General Irina Bokova said recently in a lecture at Yale, how touched she was, how important this reconstruction was to her personally, and I can totally understand her. Cultural heritage is at the root of the human identity! Of course we can give professional advice, of course we should try to resist political pressures from whatever side, but we need to realize that also the global world heritage only has a chance to be preserved in a sustainable manner when the local stakeholders are fully engaged and embracing the agreed-upon solution. 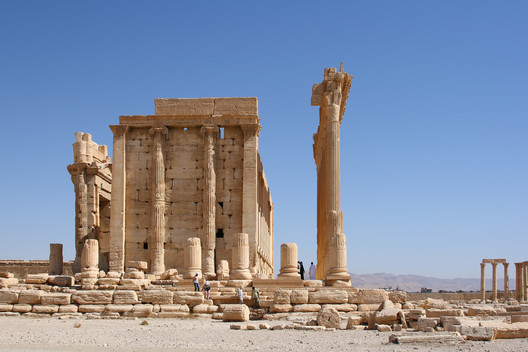