Save
Sharon 1 / BE architects
Share
Or
Copy
Houses
•
HaSharon, Israel

Text description provided by the architects. The house was designed for a sixty year old couple. Prior to construction the building site was characterized by flat and natural forestry.

At the first meeting after receiving the program, I presented two basic alternatives to the customer the plan that was selected was for the trees on site to dictate the planning of the home.

The initial planning incorporated placing a rigid square criss crossed with porous holes , the effect of the division within the square is similar to the closed and open spaces of the home i.e the covered and non-covered area depending on the location of the trees.

This is like laying an outstretched extended hand between the trunks out of a desire to preserve them as much as possible.

Upon diving into the detailed planning, the rigid frame of the square was broken, and the house was divided into three parts: a central one which connects to two secondary parts through two "connectors" – which are narrow transparent passages. Among the three wings - Courtyard retains the natural state of the area prior to the construction and the fourth area there is a bridge, which in effect defines an internal space beneath the open sky, while below is the garden.

Most of the house is characterized by openings that reach from the floor to the ceiling on all sides of the house, except for the West, which is shaded this blurs the transition between interior and exterior, creating a constant shading on the primary openings.

The north wing towards the street includes: guest room, bathroom, kitchenette and a den / office. Glass walls on its exterior characterize this division. The study, which is located at the eastern end, is open on three sides to a natural forest.

The ceiling height in the secondary spaces is 3 m.

The vegetation has been added to the existing vegetation is characterized mainly local vegetation such as olives, oaks, figs, etc. 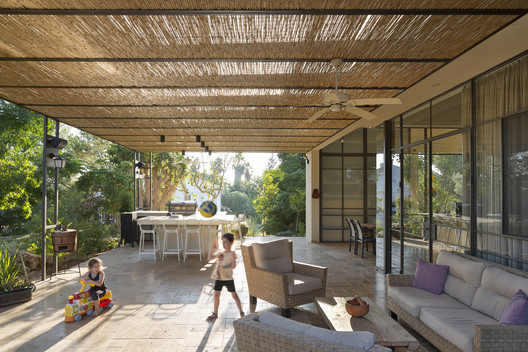 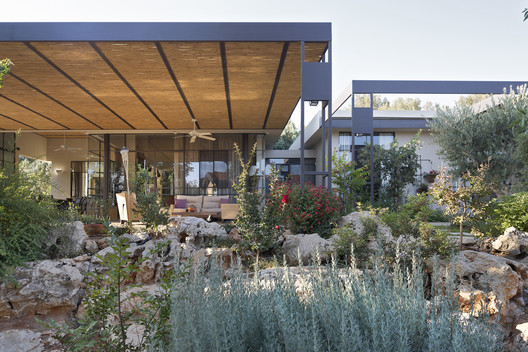