Cubo and jaja, together with VBM, Schul Landscape, Søren Jensen Engineers, and Professor Mogens Morgen of The Aarhus School of Architecture, have been selected to renew the medieval Nyborg Castle. The 15th century castle is located on the Danish island of Funen and is where Denmark’s first constitution was signed in 1282.

The restoration and additions will include a new exhibition wing and visitor center, in addition to bridges for visitors to approach the castle on its original axis and towards an existing library. The proposed wing will be situated perpendicular to the existing royal wing and will serve as the new main entrance. Both the royal wing and the historic watchtower will be restored.

Six international teams were selected in May 2015 to submit entries for the competition and a shortlist of three teams was announced five months later. The winning design was selected by a jury who stated that the proposed design was “a convincing and site specific architectural statement and atmosphere that emphasizes the history of the castle and its new function as a museum.”

The castle is expected to be reopened to the public in late 2019. 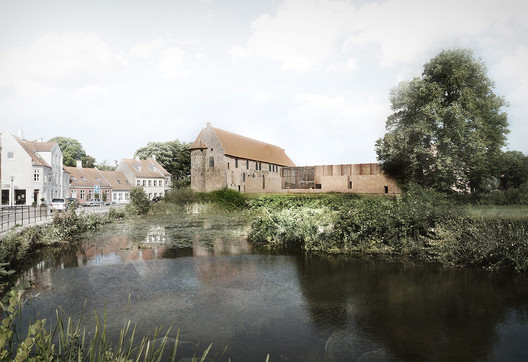