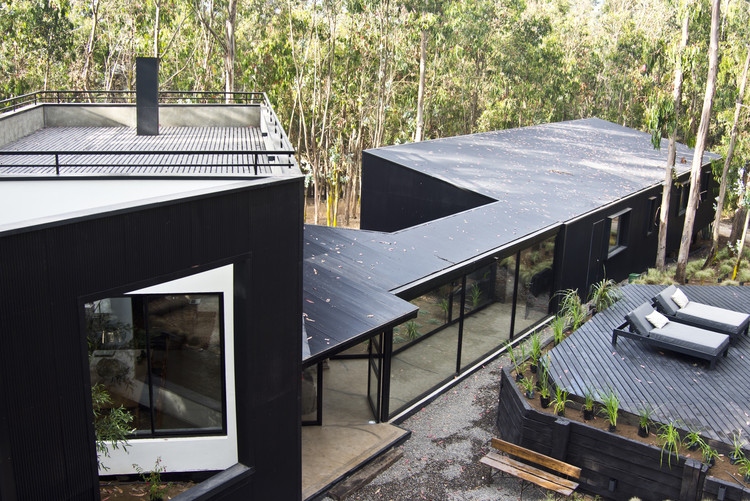 Text description provided by the architects. Although the owners already had a house in nearby Lomas Blancas, they were looking for a place where they could build something more private and away from the public’s eye. After a while searching they found, near the locality of Cachagua, a sloped piece of land located in the midst of a eucalyptus forest. It possessed the perfect qualities to attain such intimacy.

In this regard, after getting to know the place and request, the first intention was to separate the house’s different areas in a way that allowed us to maintain the intimacy of each space and to reduce the impact on the surrounding forest, locating the volumes in those  places less occupied by the trees. Starting with this idea, a central volume was drawn, alongside two other diagonal volumes that prevent the view from directing to other properties. This way, the house looks simultaneously upon itself and the forest, integrating organically into the landscape, and maintaining a dialogue, through its own geometry, with its surroundings.

The three volumes are separated by glass galleries that overlook exterior gardens; this way the different spaces can function both independently, as well as in interconnection.  Each volume possesses its own character and autonomy. At the center we located a common space with an integrated living room, dining room, and kitchen, on one of the wings four bedrooms with two bathrooms and a sheltered terrace, and, on the other wing, the main bedroom with its own bathroom.

The entire house is facing north. Great floor-to-ceiling windows and slanted roofs seek the light, creating intimate and luminous interior spaces that open and focus on the natural environment.  For this same reason, the decision was made to locate the deck and pool on the backside of the house, allowing the interior spaces to always face a natural landscape without an architectural intervention.

The exterior materiality is composed of a black and opaque micro-undulated steel sheet that enables the house to be hidden within the forest and grants it a more hermetic and industrial look. For the inside, warm materials with a subtly white-washed wood were used, creating cozy spaces. The pallet is, generally speaking, achromatic, with some primary colored elements; the exterior contour, on the other hand, is black in order to trace the house’s geometrical silhouette. 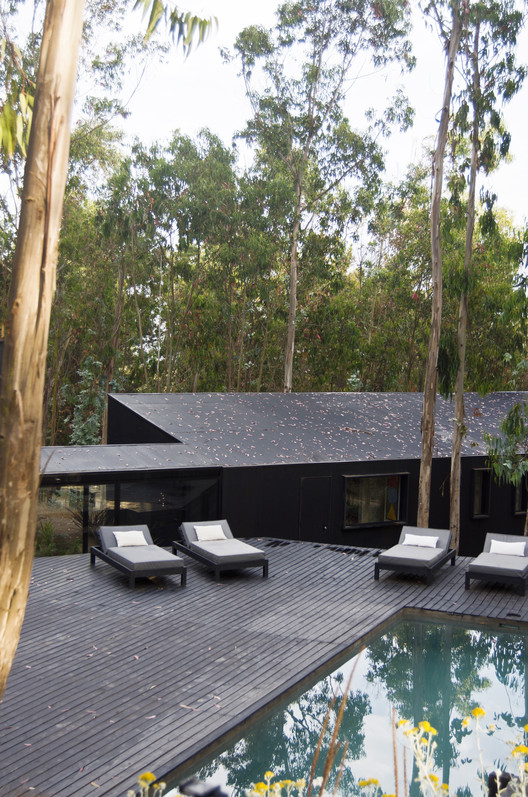 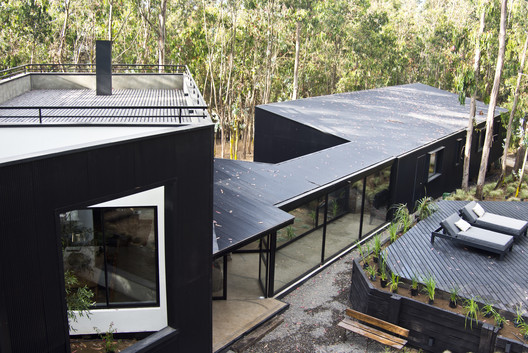