Zaha Hadid Architects has 36 projects underway in 21 countries, and four of them will be completed this year. The Salerno Maritime Terminal will open later this month, the Port House, Antwerp, in September, the King Abdullah Petroleum Studies and Research Center (KAPSARC) in Riyadh, in October, and the Mathematics Gallery at the Science Museum in London, in December.

In spite of the untimely death of the practice’s namesake last month, the firm has pledged to continue with its slate of projects, stating, “Zaha is in the DNA of Zaha Hadid Architects. She continues to drive and inspire us every day, and we work on as Zaha taught us – with curiosity, integrity, passion and determination.”

To be inaugurated later this month by the Italian Prime Minister Matteo Renzi, this new terminal has been designed to enable regional, national and international ferries as well as cruise ships from around the world to dock in Salerno for their passengers to visit the historic towns and villages on the Amalfi coast.

With 12 kilometers of docks, the Port of Antwerp is Europe’s second largest shipping port, handling more than 15,000 sea trade ships and 60,000 inland barges each year. The new Port House preserves and repurposes an abandoned 95-year-old fire station into a new headquarters for the port, consolidating the 500 employees who currently work in many separate buildings, giving them views to the port’s docks and berths.

KAPSARC is a non-profit institution that brings together people from around the world to research and tackle energy challenges for the benefit of society and the environment.  Built with sustainable construction methods and materials to LEED Platinum certification, the new center has been designed to work with its natural environment to ensure comfort for employees alongside minimising energy and resource consumption.

A pioneering new gallery that explores how mathematicians, their tools and ideas have helped to shape the modern world. The gallery’s design and layout is defined by mathematical equations that determine the three-dimensional curved surfaces representing the patterns of airflow that would have streamed around an historic 1929 aircraft at the centre of the exhibition. 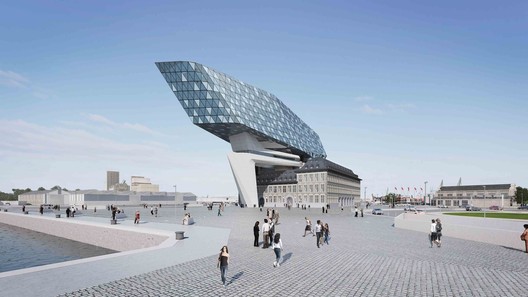