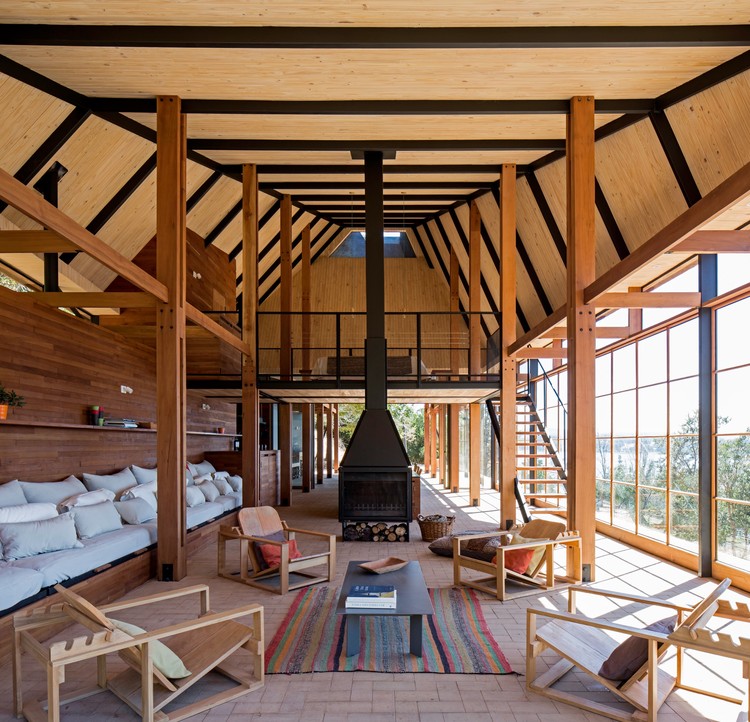 Text description provided by the architects. Located in the Rivers Region, the project is located within the lakeshore on a natural plain, limited by the native forest and the slope towards Lake Panguipulli, this north facing spot is where the best views are obtained.  In the distance you can even see the magnificent Villarica Volcano, and the noeth shore of the lake known under the same name.

The commission consisted on a sheltered barbecue place to be used sporadically and informally as the center of family gatherings. The  second challenge in the genesis of the project, to reuse materials coming from the demolition of the client’s old home in Santiago. This old structure was mainly composed by columns, beams, paneling window frames, and doors, all on larch or oak wood.

The project is proposed as a unitary and resounding volume, which covered by an inverted conical shape, it converses with the volcanic environment of the area. Under this roof the program is divided into two: the housing and barbecue area, that occupies a third of the floor area. The southern facade, facing the forest, remains opaque while the rest of the facades are open to the landscape through perimeter windows.

In the interior, an open ceiling that takes advantage on the structure height presenting all spatiality by the geometry of the roof, which culminates in an overhead 27 feet opening. The height from the ground level to the barbecue area and the roof opening act as an exhausting pipe that allows for the smoke to exit and illuminates the interior at the same time.

The public area, living and dinning room, are strategically located in the center of the first floor, while the spatiality and height of the shell allows to allocates a mezzanine where the a king size bed and bath room are located. To the south end of the building, we can find the service areas,  and 4 beds in a row aligned to the back façade, that can be used as sitting area as well. This layout clears the front side as allows for the massive views to be fully appreciated from the interior.

All the furniture has been designed especially for this project, built on site and labored by local carpenters. The materiality is metalwork and wooden the structure, the shell is covered by  larch tiles and the interior is mainly vested in pine and other wood variety. 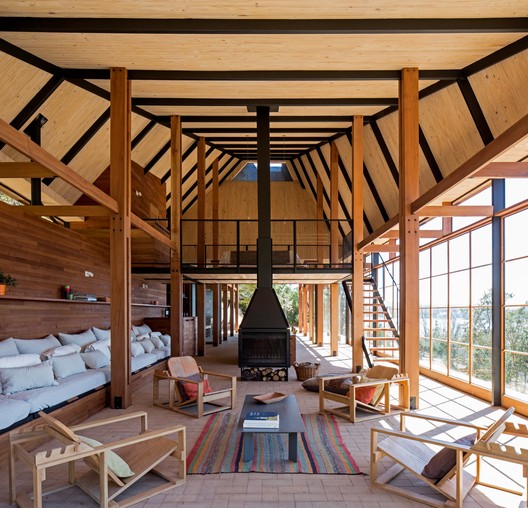