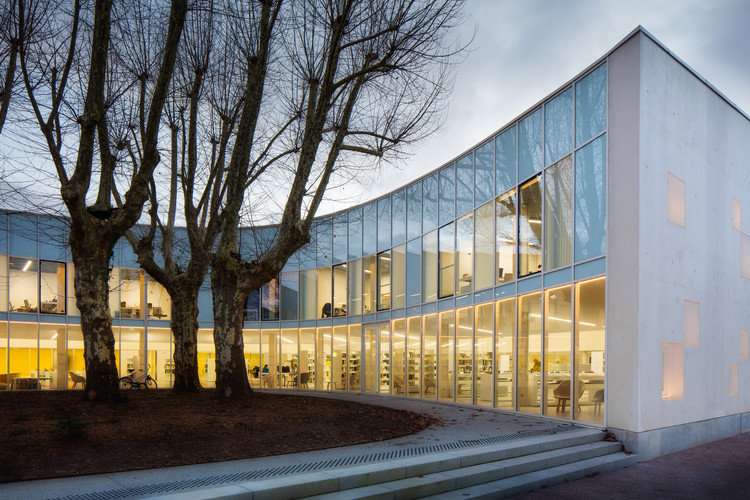 The new building and its function are immediately intelligible as one approaches from Rue Emile Zola, thanks to clear signage positioned on the east façade, while the main entrance is situated on Rue Formigé, thereby creating a direct connection with the bus stop opposite. The building’s accessibility via public transport and its inherent eco-mobility is therefore clearly brought to the fore and visually underscored.

To avoid the broken lines created by positioning the building on Rue Émile Zola, the architects at King Kong chose to create a sense of visible continuity between La Source and the neighbouring post office. The run of facades opposite the new building also respect this principle of alignment, and their choice therefore endows the immediate area with a sense of urban coherence. Any sense of meaningless dispersal or dissipation within the existing urban context was carefully avoided. It was King Kong’s aim to stitch the urban fabric of the town centre back together, rather than introduce an additional disruptive element.

The architects were mindful of the importance of the magnificent time-honoured plane trees standing on the site in the eyes of the local population, both young and old, and chose to protect each and every one of them. This was the source of inspiration for the cambered line of the building’s main façade; its well-defined but gentle curve speaks volumes of the noble nature of the building’s specific function.

The trees also provide the building with a visual filter and natural protection from the heat of the sun, creating perfectly adapted spaces within for working and reading in well-lit conditions. The gentle sweep of the building’s façade means that the main volume opens out towards the northeast, and this encouraged the architects to reposition the building’s two main functions, using the larger surface area to house the multimedia library rather than the Maison de la Vie Éco-citoyenne et Associative (MVEA). The curved façade also prevents the inside spaces from seeming either too vast or too cold. The easily identifiable reading areas, and sections for children, young people and multimedia resources, along with the educational activity area, are at once pleasant and inviting. They create a very open, lively atmosphere, free of artificial separations, and are bathed in contrasting shades of natural light, a source of pleasurable well-being. Inviting glimpses are offered of the exterior environment throughout.

Visitors enter the building via a common entrance hall, offering clear signage for all, including the sight or hearing impaired, and making it easy to find one’s way either to the MVEA or multimedia library. These two entities, serving differing purposes but also sharing a number of complementary characteristics, have been brought together within a single volume, thereby underscoring the need for exchange and conviviality between generations and social or cultural groups. The bonds established between the multimedia library and the MVEA have strengthened the dynamic role the latter intends to play within the local community as a federating and educational driving force.

The public areas are positioned on the ground floor, while those reserved for the administrative staff and management are positioned above, on an easily accessible and more secluded mezzanine floor. A sweeping corridor offers unimpeded views over the entirety of the multimedia library below and enables the staff to watch over the activity going on below, while creating a sense of unaffected friendliness between the public and staff. The materials used for the floor coverings, as for each and every element of the building’s interior design, are elegant, refined and unpretentious, brought to life by the play of light flickering over them in tune with the shifting atmospheric conditions.

It seemed logical, from the point of view of sound construction economics and thermal and acoustic insulation, to choose concrete for the building’s main structural framework. The glazed areas, in all their diversity (opalescent, translucent or transparent glass) were designed in light of the building’s orientation, and also enhance the building’s aesthetic appearance and the level of user comfort offered. The south-facing façade was set back from the surrounding constructions in accordance with local building regulations, and is equipped with shutters which may be repositioned in accordance with the changing seasons or to adapt to specific requirements. The positioning of the windows was determined with the presence of neighbouring houses uppermost in mind, as was the gradated height of the building’s façade. The neighbouring houses almost all have gardens, and the privacy of their inhabitants was to be respected.

The material chosen for the roofing enabled the architects to provide a roof space. The double curve of the roof is formed by a textile membrane enveloping the whole building in one homogeneous sweep. This membrane respects the latest environmental concerns and greatly facilitates the building’s maintenance, notably in terms of falling leaves. This material has been used across the globe in all types of construction projects for a number of years now, and other examples of its implementation in and around Bordeaux may be cited. In all cases, the membranes have withstood the test of time and their efficiency has in no way been diminished. Modern day textile membranes are even more efficient and respect the most stringent ecological norms.

The building embraces the town by means of an ample, pleasant esplanade, in perfect harmony with the redevelopments recently implemented in the vicinity, creating visually effective structural lines. The area around the main entrance has also been reworked, meaning that the building is immediately recognisable from Rue Formigé and the bus stop. Passers by enjoy unhindered views of La Source’s elegantly curvaceous façade, framing the age-old plane trees standing magnificently at its heart.

The esplanade is graced with a sculpture, La Troisième Ile, by Francesca Bonesio and Nicolas Guiraud/atelier 37.2, as part of the per-cent-for art programme.

The whole creates a feel of multiple amenities rubbing shoulders with meaningful intent, both within the building but also in connection with the wider urban context, the natural environment, public spaces and buildings yet to come. This design is inspired by a sense of just how important it is to take the existing architectural legacy of a given site into consideration when designing for the future, hand in hand with the project’s varying functions, while leaving ample room for the necessary evolution of a town whose eyes are resolutely set on the future. 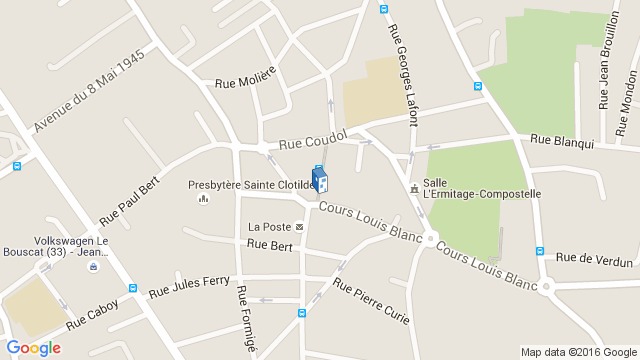