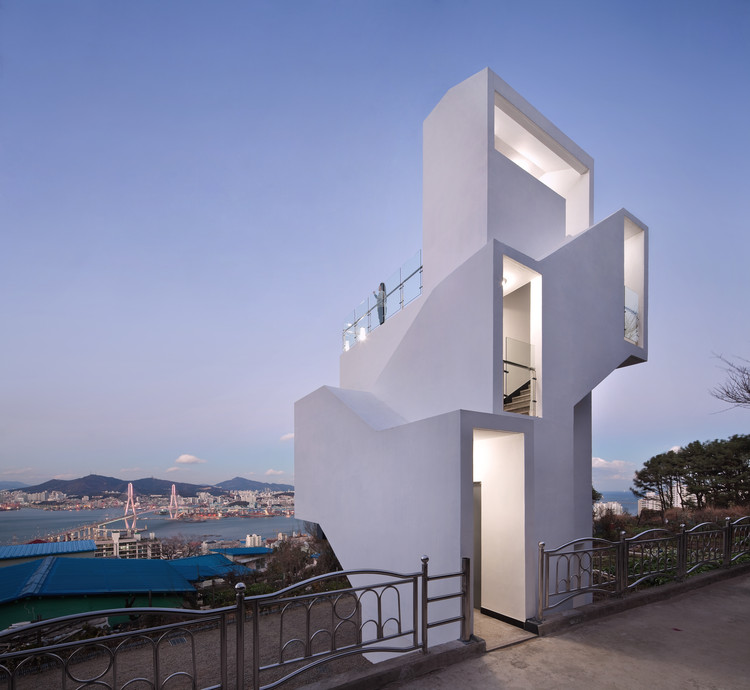 Text description provided by the architects. Located aside atop the Bongnaesan Hill, Yeongdo, Busan, this village was named the 'Haedoji Village' (Sunrise Village) on which the refugees gathering here after the Korean War imposed the hopeful meaning: 'Let's also be well-off.' This is one of the backward residential areas on a typical hillside roadway proper to Busan, which has such inadequate conditions as the difficult access to the upland and the increase of vacant or deserted housing.

However, so strong was the will of residents to construct the village community and promote the resident-led urban regeneration that the budget was raised to the public invitation of their ideas as well as that the constructions of the Bongnaesan Dulle-gil Trail course were promoted amongst which the 'Bongnaesan Dulle-gil Viewing Lounge' was placed thanks to its advantageous location optimal for viewing the Busan North Port.

The Huimang (Hope) Village formed on top of the Mt. Bongnae, Yeongdo, is situated on a north-faced slope and made up of spontaneous alleyways so as to enable automobile access only from the northern low entrance. The site is at the intersection of the central alleyway in the village with its uppermost Bongnaesan Dulle-gil Trail: here, one can see all the panorama of Busan, ranging from Daecheong-dong and the Hillside Road in Choryang to the region around the North Port, the North Port Bridge, and the Oryukdo Island.

Usually, the northern low roadway through which local residents approach the village serves as the main entrance, but this site where the central village alleyway intersects with the Dulle-gil Trail, I thought, has an advantage of providing another new entrance to the village that enables contact with outsiders who use the Trail.

Located at the village entrance are the traditional totem poles (Jangseung) and Dangsan Trees which have been used from old days as the leisurely place central to the village, signifying its guardian and marking the border. Likewise, we represented the lush image of leisure that tree branches create by intermingling in harmony. The skip-floors based on the difference of elevation (about 2m) between the site and the Trail accommodate various programs and enable the multi-level perspectives from which one can take a rest viewing excellent landscape, in order to make a new iconic building of the village that has the image of a 'sight tree.‘

In order not to give a sense of visual pressure to those who climb from the central village alleyway, the building was placed aback on the site so as to be recognized with the front yard. The lower part was made into a piloti so as to enable natural use of the front yard. Classified as a natural green zone by the building code, the site must fulfill the functional needs within the building area sized 37 sq. m. For this matter, we designed toilet at the remaining space under the entrance staircase running from the Trail, while on the remaining 2nd floor space other than the staircase, designing three-dimensional spaces like multi-level hideouts running from the front open space to the back kitchen and to the circular staircase.

The interior floor-to-ceiling windows, the horizontal and vertical windows, and the three-dimensional frames wrapping up the outdoor stairs and the rooftop observatory are the most important architectural devices in this project. These devices serve as the fields of social exchange that naturally circulate movements into the building at the interface between the village alleyway and the Trail. The scene of the stairway in which movements smoothly become multi-level circulations and reach the rooftop observatory was to signify the unique local characteristic of this area by mimicking the landscape of the Hillside Road created in negotiations between topography and landscape. 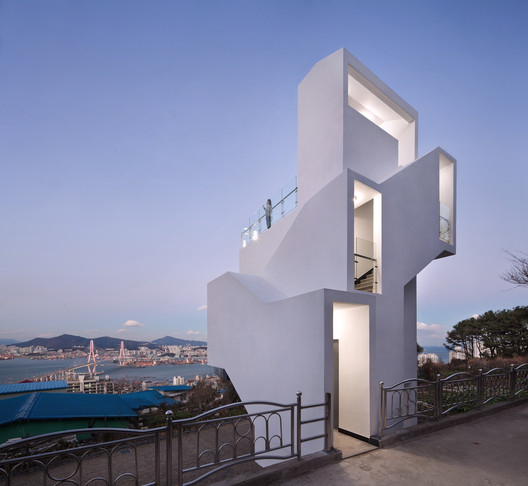