Save
Triplex in Paris / Studio Pan 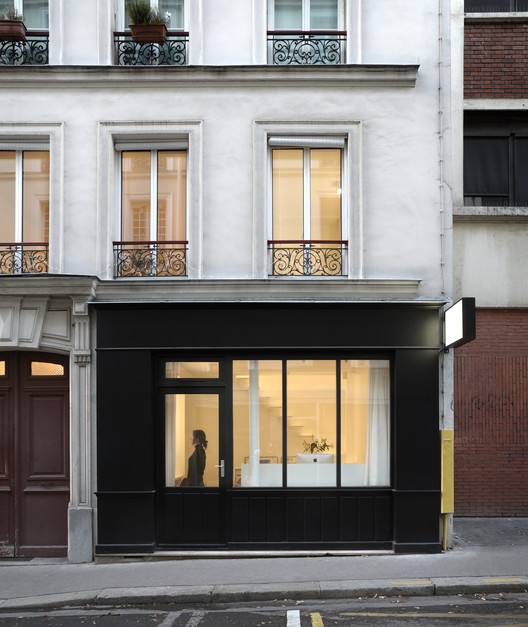 Text description provided by the architects. Located on a side street the hip 11th district of Paris, the job site was a boutique of an abandoned beauty salon that occupied part of the lower levels of a late 19th century working-class apartment building. The original space consisted a 19m2 ground floor that has been connected with a 32m2 flat upstairs and a18m2 basement right below. We have further sacrificed the precious square meters for thermal and acoustical insulation. Especially for the basement, we’ve literally built a box in the box and installed mechanical ventilation to make it suitable for daily use. The demolition and insulation had left us 3 boxes on each level.

The goal was to create a live-work pied-à-terre for a couple while they currently split their time between Paris and their home in the province besides their frequent travels to other places. Ideally, the place can also pay for itself by renting out a part to travelers. The fact of having three levels was quite ideal for a division. We naturally decided to create two independent units: the flat on the first floor to be the rental unit and the rest to be the office & pied-à-terre for the owners. However, we have kept the connection between the two so that they can be reunited seamlessly and without effort into a generous (Parisian standard) triplex whenever needed.

The program is quite intense for a 34 m2 in total. 2 permanent workstations for the couple and ideally a temporary one for a third person, a full service kitchen, a living-dinning area, a bathroom, a bedroom and ideally an extra bed for a friend, and also the staircase that allows to access the upper unit whenever needed.

A staircase in such a small space can be very dominant. We opted for the floating treads for an extremely light form and minimal visual impact.  Usually not used, it becomes almost a sculpture in the background for the boutique. At the bottom, it is integrated into a banquette or daybed.

A kitchen in a small office can be distracting. So we hid it in a closet to get it out of way when it’s not in use.  A central island that built around the fridge, more kitchen cabinets and the A3 format printer can be used as a bar, part of the kitchen countertop or the third workstation by pulling out a hidden tabletop.

The working station facing the window has a screen goes up to the eyelevel of its user to provide the right amount of privacy but still allow the view towards outside. The station is also retreated 30cm from the window, which has not only created a buffer zone from the exterior, but also let the natural daylight reach the basement via the glass panel right under the station.

The workstation is made up of 2 parts, a narrow fixed shelf that holds the computer and the objects in place while the table on wheel can be removed for other purpose, i.e. as the dining table.

In the evening, when the kitchen closet is open and the table moved in front of the banquette, the office becomes the dining room for 6-8 people.

Without any charming architecture elements from the epoch, the only advantage of the space was the three French windows along its south façade, although they were separated by a partition. The demolition re-established the continuity of three windows. It had a beautiful rhythm so that we decided to duplicate the effect with a full height mirror on one end and made it a series of six windows. On the same elevation we’ve added another full height mirror by the entrance. The two mirrors has created a visual extension along each side of the flat, thus doubled its length and created a seemingly continuing space. In addition, we've chosen a mirror as the backsplash of the kitchen on the opposite wall to the windows, in a very subtle way doubled the depth to the space and created an illusion of openings on both side of the flat.

Being rectangular space, the flat can be a project quite straight forward, yet when taking into consideration its connection with the lower unit, there are more variables in the equation.

When separated from downstairs for rental purpose, the projected occupants of the flat will be a couple or a family of three. The ideal program is to create a real bedroom for the couple, a reasonable sized living area with a comfortable full service kitchen, closet and storage for guests and the housekeeper, a bathroom with a large shower, and in the end, a sleeping alcove for the third person to ensure privacy for everyone. However, when the flat is reunited with the lower unit, it is also desired to have an open space that is big enough for parties or events. A movable partition made it possible to achieve the two contradictory programs. Its different position allows configuration of so many possibilities.  The users can choose to have either a larger room or a larger dining area, or to have the bedroom disappear completely into a cube. 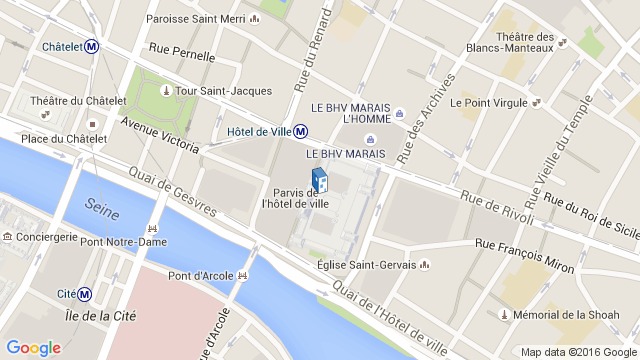 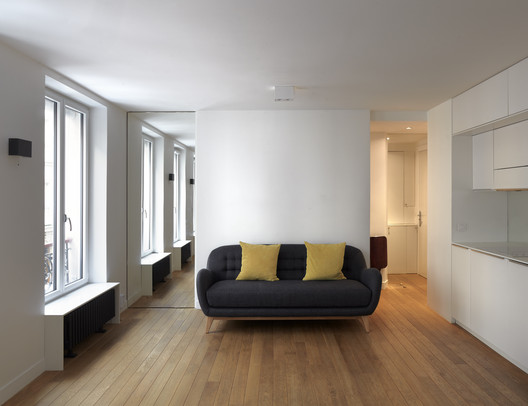