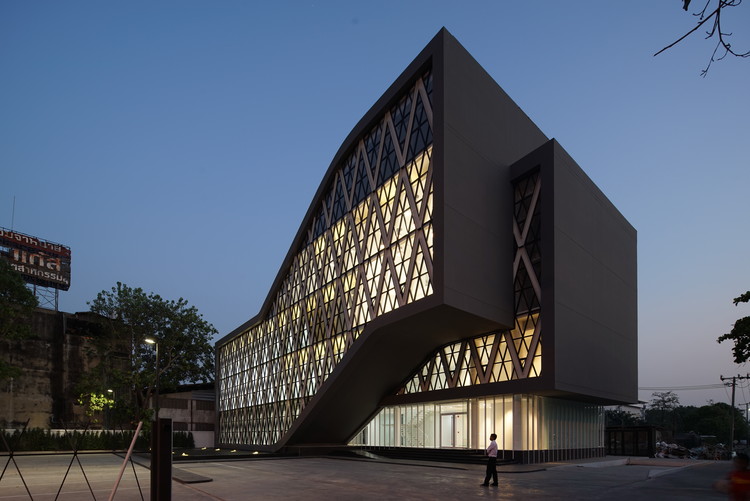 Text description provided by the architects. Saengthai Rubber Headquarter is situated in the front of a half century factory compound on Poochaosamingprai Road, the historical industrial development area of Bangkok. The Headquarter will be the first move for their organization’s reengineering. It is the expressive gesture for their visionary business plan and also the portal gateway to district.

The requirement listed for 5 storey structure. Fully occupied as work space for main businesses and jointed companies. The given form initially started with the composition of two boxes wrapped with black concrete frame, then intersected to separately form spaces for each organization. The central area is where the vertical circulation is located. We lifted the rear box up to create the terrace for president office on the 4th floor. Then bended the front box to create the car drop off in front, and continue the form to the 5th floor to be the shrine hall.

From the center, it seems like a common concrete column structure with the flat slab concrete floor. The distribution of the load transfer to the façade. Where lattice pattern forms as a super truss made of steel section, bringing the weight all down to the ground. It is our first attempt to use the integration of structural frame, both concrete and steel. With the large reflecting pond, the structure seems to be floating. The triangle pattern from the façade has become the principle detail that applies throughout the project, from the glazed facade to further details including the lighting fixture and fence design.

While exterior is painted in black, all of the interior element is painted in white, giving the clarity and futuristic appearance to the inhabitants. The interior space is an interplay of double height work floor and over hanging meeting room that has panoramic view to the north and south, giving the visual clarity and openness to working atmosphere. The bended floor becomes seating steps for casual meeting arousing the sharing culture.

The composition of two boxes, lifted and bended can also be interpreted as a metaphor to the core business as it express the major quality of the rubber, the elasticity.

Being together with the 50 years old Banyan and Bodhi tree, they are speaking of the heritage, they have been through while look toward the future with the fresh vision of new generation. 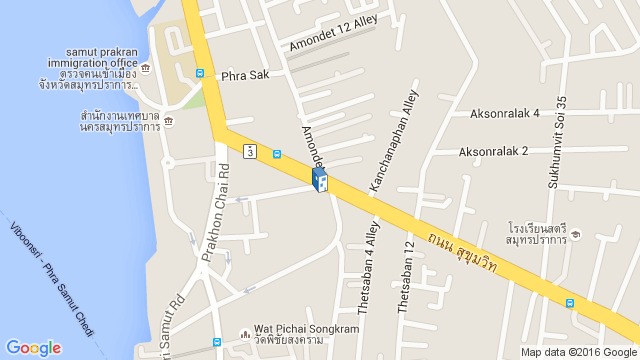 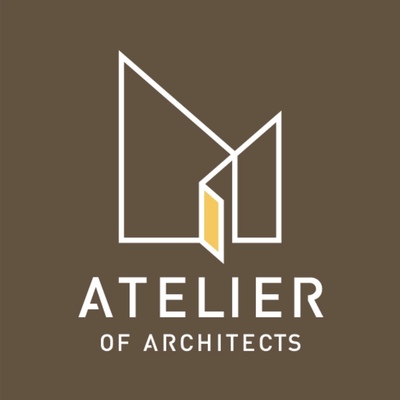 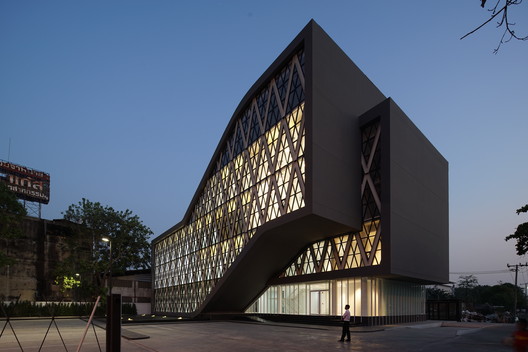