In the 5th season of Mad Men, it’s June 1966, and Draper moves into his love nest with his young wife, Megan. The set was designed by Claudette Didul and the Mad Men team, and it’s a psychogram of a man who is about to fall apart at the seams.

Everything about the space is designed to be perfectly of its time. It has a white carpeted conversation pit for a living room, and a modernist kitchen with clashing colours. The masculine elements include a leather armchair, and a drum-shaped ice bucket. The design is inspired by the 1965 book “Decoration USA,” by Jose Wilson and Arthur Leaman, and the bestselling books of Betty Pepis. This is pop design, no high modernist masterpiece, it’s about pretending you are happy, rather than about civilization. A small indicator of depravity: the living room is over twice the size of the dining room. Who cares about table manners when your wife is half your age?

Perhaps the classic design decision that would never be made today is the way that the kitchen is screened off from the living and dining spaces. Kitchens now, thanks to the popularity of the kitchen island, are about public performance. But this kitchen, which Megan probably never spent much time in, is designed for efficiency rather than teppanyaki. The most social thing about the kitchen is the bar, which Draper, in his spiral into alcoholism, gives a heavy workout.

Then there’s the back rooms, increasingly small and private, where Draper is surrounded by closed doors. The division is what modernist architects call a “bi-nuclear” plan—one section of the house for social and daytime activities, the other for privacy and rest. For television series directors, they’re all equally good as arenas for emotional confrontations. Fittingly for his character, it’s in the back of the apartment, where direct sunlight never falls, that Draper tries to store his past, the world he made before 1966. Unfortunately for the children from his broken marriage, that past includes them. And off a small room that leads off his bedroom—behind more closed doors than any other room—is a small, completely windowless space, the heart of the heart of the apartment, a kind of cell, just big enough to lie down in. As Bert Cooper said in season one: “a man is whatever room he is in, and right now Donald Draper is in this room”

What this model of Don Draper’s apartment shows is a life built on divided ground; it’s impossible be good at everything: a bachelor and a father, a husband and a lover, to feed off the dreams of others and remain sober yourself.

Start the tour above, or via this link. The animation will guide you through different spaces in Don Draper’s apartment. 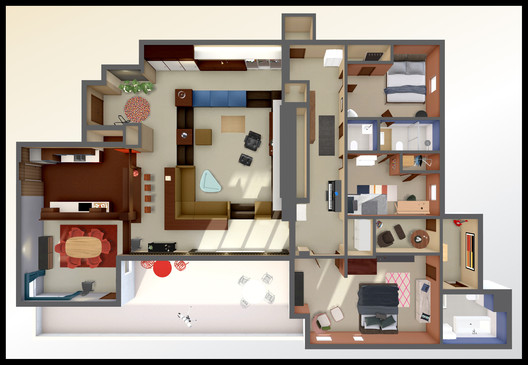