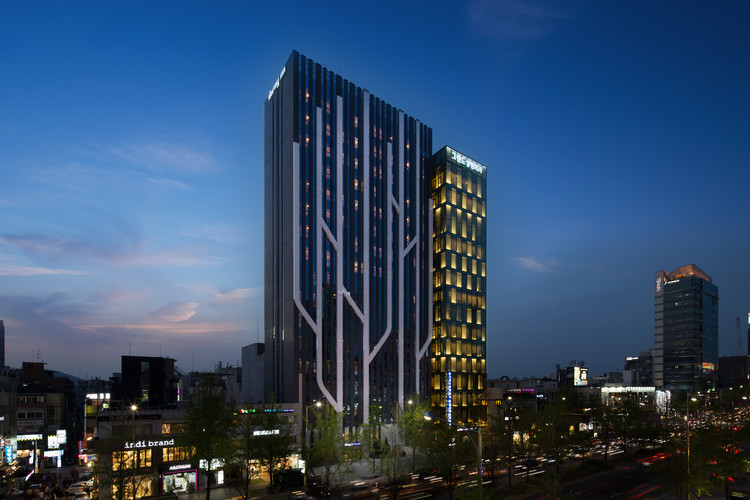 Text description provided by the architects. Dormy Inn Premium Seoul Garosugil Hotel is on the way into Garosugil which is famous as a fashion street. Garosugil is a representative attraction area of Seoul Gangnam, famous for fashion boutiques and cafes in low-rise buildings along the long tree-lined streets.

Its southern side is facing the business quarter of Gangnam area across a 50m-wide boulevard, and its northern side consists of commercial district in low-rise buildings with an open view toward Han River.

In the beginning, planned as a neighborhood living facility with 15 stories focused to clinic facility, it was under construction for basement. After the design change to a hotel was confirmed, Planearth Architects took charge in architecture design and completed the construction in early 2015.

By the nature of Commercial area, a typical architecture with central corridor in a full usage of lot coverage according to the building line cannot but become exclusive for back side street and, in most cases, the severance between front and back side street is accordingly unavoidable.

When changing its use to hotel facility, the first thing we proposed was to construct newly a pedestrian passage out of the space spared from the left side of the building. By installing a pedestrian passage connecting the front street and the rear shopping street in order to make it an alley naturally created between buildings where people pass by frequently rather than a passage concept simply connecting one point to another, this makes it possible not only for hotel quests but also for normal passers-by to access directly the rear pedestrian street without making a long detour through the boulevard, and by locating the hotel sunken space for the ventilation and skylight of the underground floor and the exit of the rear shops at the pedestrian passage side, it makes it possible to connect the hotel restaurants, hotel sauna and the exit of the rear shops.

The difference of the projected surfaces made by overlapping stone material in a black tone that represents trees and branches in a white tone, irregularly arrayed against the background of curtain wall in a dark blue tone which is a metaphor of shadow, creates a deep shadow and realizes faithfully the feeling of perspective.

The stone material in a black tone was designed applying various modules with width of windows from 700mm, minimum requirement for evacuation, to 650mm, 700mm, 800mm and 900mm.

The façade designed in such way may became an attractive signpost and, at the same time, recognized as a symbol of Garosugil for everyone including travelers finding their way out and residents frequently passing by this area.

Dormy Inn Premium Seoul Garosugil Hotel, the first Korean branch of Japanese business hotel chain, has 215 guest rooms and auxiliary facilities such as downtown sauna facility which is a special feature of Dormy Inn Hotel, a restaurant mainly for breakfast serving Japanese home-style cooking and a sky lounge at the top floor.

The basic interior design of the hotel was charged by ILYA Corporation in Japan according to the facility standard of Dormy Inn Hotel. 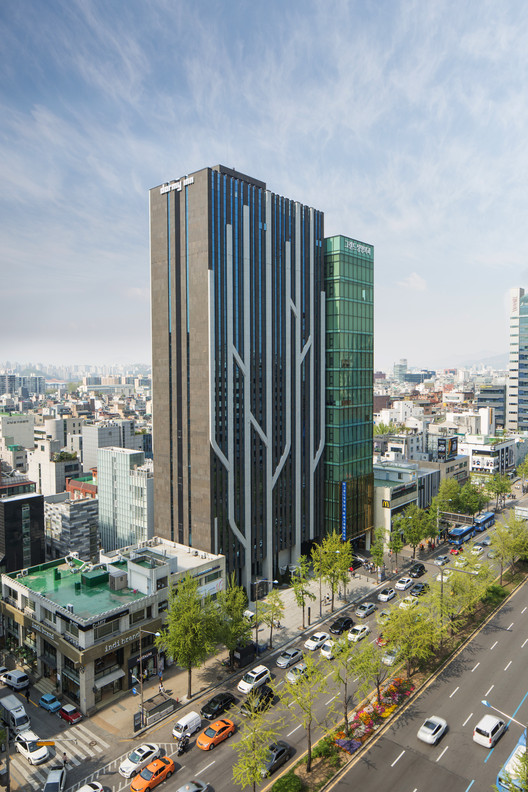