A new cultural center designed by Mecanoo, located in the Longgang district of Shenzhen, China is currently under construction and is set to top out by end-April. With the goal of revitalizing an existing park-square, the new complex includes a variety of programs such as a bookshop, an art museum, a youth center, and a science center. The nearly 100,000 square-meter building is set to open to the public in 2018.

The building is organized by four elongated volumes that connect with the surrounding context. The building utilizes large arched passageways that connect pedestrian paths and provide shelter from the weather. Once completed, the cultural center will be 365 meters long, 45 meters wide, and 24 meters tall.

Entrances to the various programs of the cultural center are marked by covered squares, allowing the interior to extend into outdoor spaces.

The exterior is designed with angled walls, which are built with cast-in-place concrete. These angled walls, span from two to four stories and dramatically increase the openness of the interior spaces. The cultural center also contains “super cores,” which are much stronger and larger than typical concrete cores. These “super cores,” in conjunction with the structural façade which contains embedded beams and columns, allow for the interior spaces to be more open, “clean,” and contemporary. 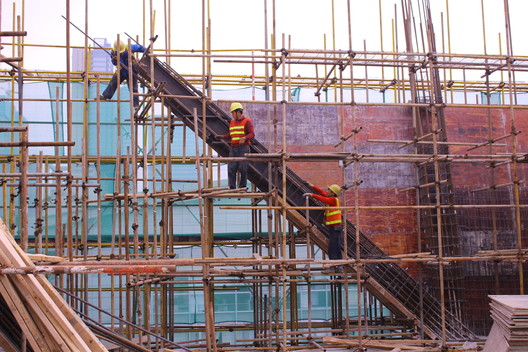